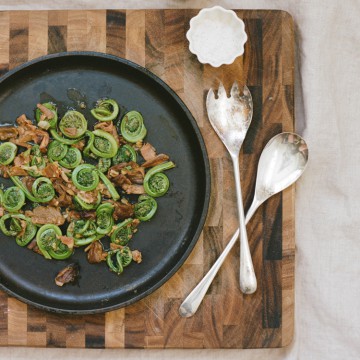 Whole9 guest post by Diana Rodgers of Sustainable Dish. Below is an excerpt from Diana’s new book,  The Homegrown Paleo Cookbook, about how to forage for edible plants:

We all know it’s healthy to eat vegetables and fruits, but we often forget that they don’t need to come from a farm: wild plants are nutritional powerhouses. Purslane, for instance, a weed that thrives in many parts of the world, has six times more vitamin E than spinach and more omega-3 fatty acids than any other vegetable. As humans have selectively bred produce to be larger and sweeter and to withstand storage better, we’ve lost many of the vitamins, minerals, protein, fiber, and healthy fats that make these foods so good for us. 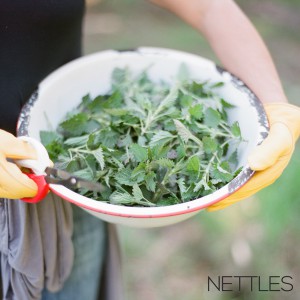 Nettles: These spiny little buggers are found in early spring. Seek out the smaller plants, and use gloves when harvesting. You’ll commonly find them growing in large clumps in rich, moist soil. They’re high in calcium, vitamins A and C, iron, magnesium, thiamin, and potassium. Naturopaths consider nettles useful for adrenal fatigue, arthritis, and general inflammation. Interestingly, the fiber from this plant is great for making ropes and clothes, and it was used in World War I when there was a cotton shortage. 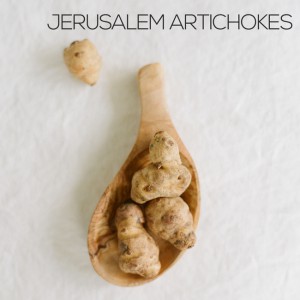 Jerusalem artichokes: This tuber is a close relative of the sunflower. It can be cultivated or grow wild, but the wild version is a little more difficult to identify because they don’t always show their classic, mini-sunflower blossoms. Jerusalem artichokes contain inulin, a carbohydrate that won’t spike your insulin levels, which makes them a good alternative to potatoes in many dishes. They are also high in iron, phosphorus, potassium, and thiamin. 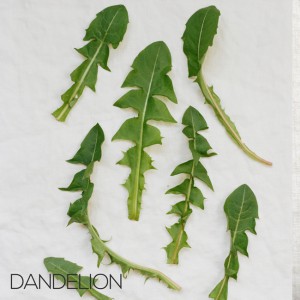 Dandelions: When harvested early in the spring, dandelion greens and their flower buds are very delicious. Avoid the ones growing in sidewalk cracks and instead look for young plants growing in a pesticide-free lawn, whose flowers haven’t yet bloomed. They’re very high in iron, manganese, potassium, riboflavin, thiamin, and vitamins B6 and C. 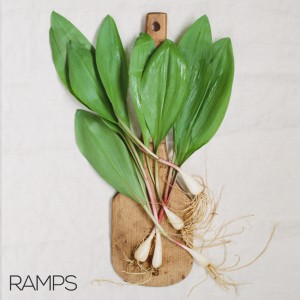 Ramps: Sometimes called “wild leeks,” ramps can be cooked or eaten raw, just like onions. Their flavor is intense, so I suggest you try them sautéed or grilled first. They’re high in vitamin C and iron. 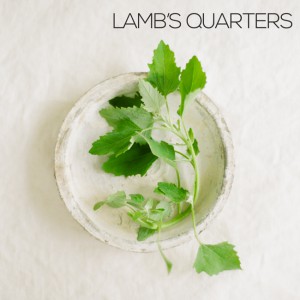 Lambs quarters: Once you learn to identify this leafy plant with its powdery coating, you’ll see it everywhere. Lambs quarters best eaten in early summer and can be used in place of spinach for cooking. They’re a very good source of vitamins B6, C, and K, thiamin, riboflavin, calcium, potassium, copper, and manganese. I much prefer their taste when cooked – they don’t have as much flavor raw, but when you cook them, they have a lovely texture, silkier than spinach with a similar flavor, but a slightly more “earthy” taste.

Fiddlehead ferns: Coiled, spiral gifts of spring, fiddleheads are among the most beautiful things to put on a plate. Be sure to cook them well; they are not to be eaten raw. It’s also important to get the sprouts from the ostrich fern and not other varieties. Look for a brown, papery covering on the fiddlehead and a U-shaped groove on the inside of the stem. Fiddleheads can be found growing in clusters of three to twelve in damp soil, such as by rivers and streams. When harvesting, be considerate and only take half of the fiddleheads in a cluster, so the plant can still survive. They’re very high in manganese, magnesium, phosphorus, iron, potassium, and vitamin C, and they have twice the antioxidants of blueberries. 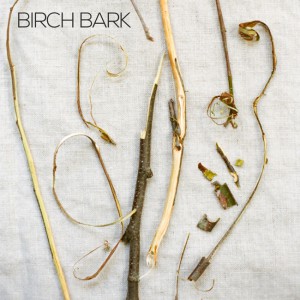 Black birch: If you have kids, seek out a black birch tree and snap off a branch, then peel back the bark and have them smell it. It will blow their minds—–it smells just like root beer! You can make a sun tea by stripping the bark of many branches—also a fun project for kids. An added benefit is that black birch is said to be a natural painkiller. 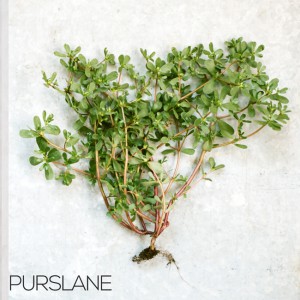 Purslane: Purslane plays the starring role in many cultures’ traditional dishes, from saag to spanakopita. It has more omega-3 fatty acids than any other plant. It’s has a mild, lemony taste that’s fantastic in a salad, and you can find it growing just about anywhere you look!

Talk to an expert: Consider finding a local expert on foraging who knows what grows in your area. It’s often much easier to learn about plants when someone points them out to you, rather than simply seeing photos in a book—and since it’s particularly important to identify wild plants correctly if you’re planning to eat them, it’s worth making sure you learn from someone who knows their stuff.

Forage near an organic farm: The soil on and around organic farms is healthy, so you get a wide variety of wild edibles, and since they don’t use chemical pesticides, you don’t need to worry about ingesting them on your wild plants. You might even ask at the farm if you can harvest some purslane or lambs quarters from their beds. I’ll bet they will be thrilled to have you take them, for free!

Avoid certain areas: It’s best to avoid plants growing along a roadside or questionable waterways, to avoid potential toxins. It’s much safer to find edibles on an organic farm than from sidewalk cracks alongside a busy road in a city.

Get permission: Don’t just let yourself onto someone’s property if you see a patch of special mushrooms or Concord grape leaves. Ask first.

Be sustainable: Don’t yank out every ramp root or every single fiddlehead in the clump. Take just a few, no more than half. Also, check your state’s list of endangered plants before you head out, and if you find an endangered plant, do not pick it.

Be aware of fakers: Be sure you can identify the poisonous look-alike plants for your favorite forage items. This is especially true of mushrooms; many of the most lethal varieties have an agreeable flavor. For safety, when you’re new to foraging, start with easy-to-identify plants such as those listed above.

Start small: Some people are allergic to certain wild plants. Take a small taste first to see if it agrees with you. If you tend to have digestive issues with certain cultivated plants, it’s likely that certain wild plants will disagree with you, too. 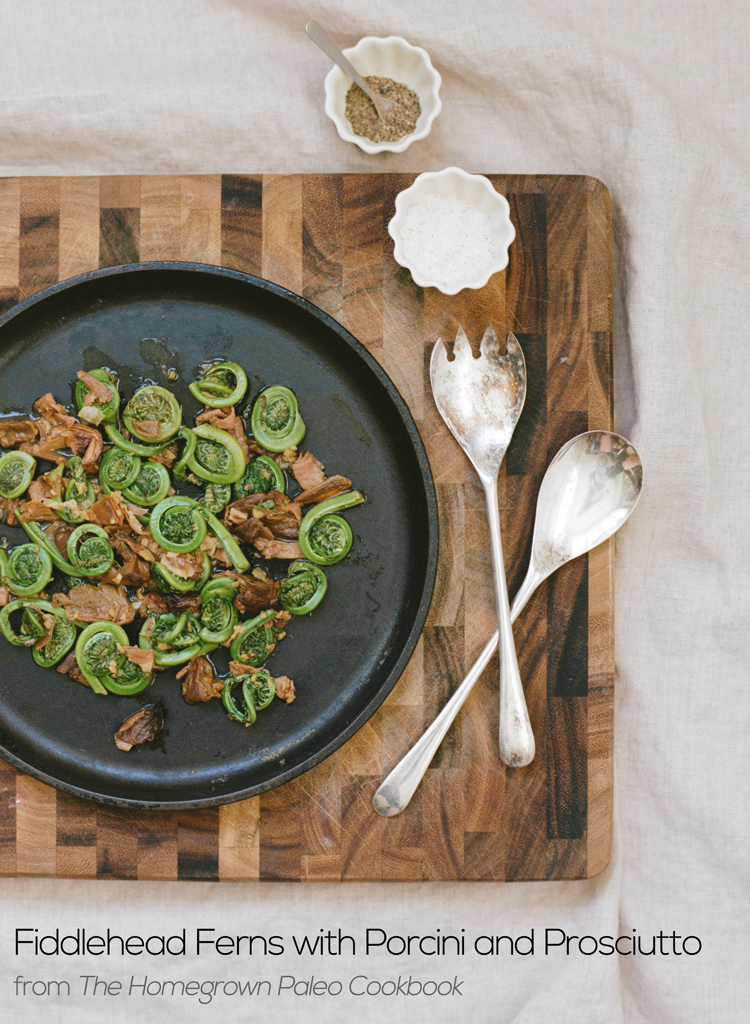 Is there any vegetable more beautiful than a fiddlehead fern? These little spirals are what early spring in many parts of the country is all about. They’re here and then poof, they vanish so quickly that many people easily miss them. If you’re lucky enough to get your hands on some, you will love them. Nutritionally, fiddleheads’ antioxidant activity is twice that of blueberries. It’s important to cook fiddleheads well (boil or steam for 15 minutes), as foodborne illness has been associated with raw and undercooked fiddleheads. It’s also important to get the sprouts from the ostrich fern and not from other varieties. Look for a brown, papery covering on the fiddlehead and a U-shaped groove on the inside of the stem. They can be found growing in clusters of three to twelve in damp soil, such as by rivers and streams. When harvesting, be considerate and take only half of the fiddleheads in a cluster so that the plant can survive. You can also try them in place of asparagus or with hollandaise sauce.

NOTES: If fiddleheads are difficult to source, try using asparagus (trimmed and cut into 2-inch lengths) instead, reducing the cooking time to 5 minutes. You can substitute bacon or pancetta for the prosciutto

In my book, The Homegrown Paleo Cookbook, I not only provide over 100 gluten-free, farm-to-table recipes (all recipes are labeled Whole 30, Nut-free, Egg-free or AIP), but I show you how to connect with your food.

Whether you want to simply understand more about sustainable food production in an effort to be a better consumer or want to actually get dirty and grow your own food, The Homegrown Paleo Cookbook is your guide to breaking free from the industrial food system and making more sustainable choices when it comes to buying your food. Incorporating wild foods (wild meat like venison, seafood like mussles, and plants like weeds) into your diet is a great way to improve your health and stay more connected to the natural world. 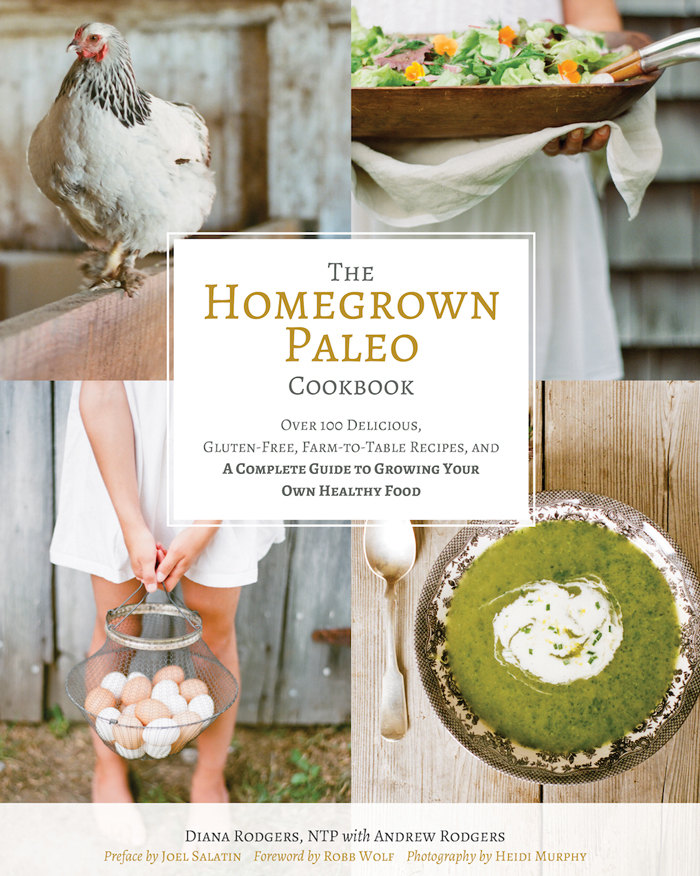 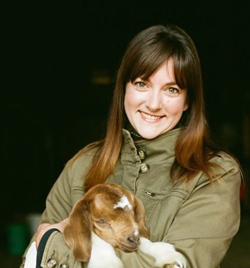 Diana Rodgers, NTP is a Massachusetts based organic farmer and nutritionist. She runs RadianceNutrition.com and also the blog SustainableDish.com where she explores the ideal foods for both human nutrition and the environment. Diana is the co-host of the Modern Farm Girls podcast and author of Paleo Lunches and Breakfasts on the Go and The Homegrown Paleo Cookbook. She runs a YouTube channel called SustainableDish where she posts videos about sustainable agriculture, cooking, and her life on the farm. Follow Diana on Instagram.