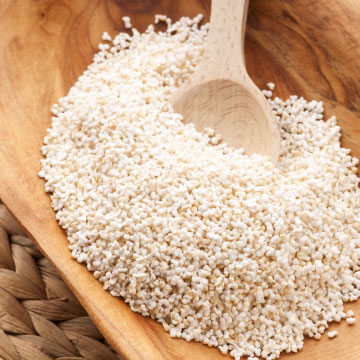 A special guest post from Badier Velji, Whole9 Envoy and author of The Lazy Caveman

Gluten-free diets are trendy. Yep, it’s true, and a sad truth really.  I come across scores and scores of people who do the right thing and try to follow a gluten-free diet because they notice that the removal of gluten products positively impact their health. But if you ask many of them, they can’t answer the following basic questions:

But unlike those people, you’re a well-informed Whole9 reader who doesn’t follow dietary recommendations based on a whim and likes to be able to explain why you choose to eat the way you do. With that in mind, let’s answer some of these questions.

Gluten is a two-part protein composite that is found in many grains, but most famously in wheat. It consists of a prolamin and a glutelin. Prolamins are storage proteins, and they are the “hardware stores” of the wheat structure that distribute amino acids central to the plant’s development. Glutelin is the “glue” that holds these hardware stores together. These proteins are essential to the existence of these grains, but as we’ll explore further, that is also the same characteristic that makes them so harmful to our bodies. 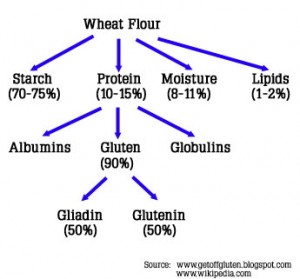 Wheat gluten itself consists of the prolamin gliadin and the glutelin glutenin (thanks for your confusing naming conventions, scientists!). Gliadin has been implicated as the main environmental factor in causing Celiac disease, when combined with specific genetic factors. Glutenin is the leading cause in the development of a wheat allergy.

While these two proteins are the most likely to have a negative effect on the human body, they are far from the only potentially problematic compounds. It turns out that the majority of grains have a structure similar to that of wheat, namely one part prolamin, one part glutelin. There are many other prolamins out there: hordein (barley); secadin (rye); zein (corn); orzenin (rice); avenin (oats); panicin (millet); and a few others. These other prolamins are poorly researched compared to gliadin, and their effect on the body is not well-understood. There are also an equal number of grain-specific glutelins that pose an allergy risk as well.

The Trouble With Gliadin

So how exactly does gliadin harm us? Well, it depends on who you are. If you have diagnosed Celiac disease, then the effects of gliadin and some of the more heinous prolamins (hordein & secadin) are readily apparent in the form of diarrhea, bloating, nutrient malabsorption and a whole host of other things you can read about here.

Gliadin accomplishes this by stimulating zonulin, the traffic cop of the gut lining, to allow it to pass into our digestive tract largely undigested and interacting with tissue transglutaminase (tTG), an enzyme found throughout the body. Tissue transglutaminase is a critical part of how the body functions, and specifically, how the tight junctions in the microvilli (think hairy fingers) in our gut are formed. But when tTG interacts with gliadin, there is a potential to create antibodies, and suddenly, that enzyme that is such an important part of our body is now seen as an enemy. And that’s why people with Celiac disease see such strong reactions: their bodies are literally attacking themselves.

So if you don’t have antibodies to tTG then you’re fine, right? Not so fast! There are 7 other types of transglutaminase enzymes in the body, all of which have the ability to turn against you via autoantibodies. The gliadin-tTG interaction is just the best studied of these. And current Celiac tests are only testing for antibodies to tTG, not to any of these other enzymes. So even if you test negative for antibodies to tTG, you certainly could have a variant that is still causing damage to your tight junctions. In some people, a reaction to gliadin may go unperceived because the symptoms are not as apparent as it is in those with Celiac. With gluten intolerance, you can potentially exhibit all the same symptoms as someone with Celiac, in addition to things like weight gain and mental disorders.

It’s notoriously difficult to prove causation, and unfortunately, science cannot yet tell us about some of these other enzyme-prolamin interactions. There are blood tests that are being developed to diagnose some of these lesser-studied interactions in the body, but the only true inexpensive tool that everyone has at their disposal is to do a complete elimination diet of these problem grains. And this leads us to the basis of our recommendation of a grain-free lifestyle…

Gluten Isn’t The Only Issue

Science is awesome, but it won’t change the fact that we are not well-adapted to grains. Gliadin and glutenin are certainly the most problematic components of wheat but they are far from the only ones, and their analogues in other grains may cause issues as well. I haven’t even talked about lectins, phytates, opiod peptides, fructans, insulin response, and cross-reactivities with foods like dairy! Because there are so many problematic compounds in all grains, we (Whole9 and friends) have found that an across-the-board elimination of all grains is more beneficial to long-term health than cherry-picking grains to eat. A 30-day (minimum) elimination is needed to help you assess what effect these compounds have on your body; after the 30 days, you’re free to play detective and try to figure out what foods cause you problems.  (But in all honesty, no food is worth a reduced quality of life.)  Thankfully, the Whole30 is a well-defined 30-day elimination plan that will help you establish a baseline free of these triggers.

I hope by now you’re pretty convinced that grains are not all that good for you, but there are a few more questions to tackle that inevitably come up:

Well, I ask you to remember a few things while experimenting:

Reactions to grain consumption vary from person to person. Some people seem to tolerate gliadin “just fine”, others can’t handle the slightest exposure. These are two extremes of the same bell curve; the majority of people will have some trouble tolerating some of the various grains. Personally, I find that I don’t tolerate any grains well, and I find it much easier to avoid all of them rather than make exceptions for any.

If you’re going to do some N=1 experimentation, be sure to limit variables and remove biases

The reason it’s so tough for scientists to prove causation is that there are just so many darn variables to track. If you’re experimenting with grains, don’t eat them with dairy and sugar as well. Because if you do have an adverse reaction, you won’t be able to point to a singular cause. Also, don’t convince yourself that you do not have a reaction to a food just because you desperately want to eat that food. I tried to do that to myself with rice because I was tired of not being able to eat sushi, and it ended up with me bloated and miserable. Remember, no food is worth reduced quality of life. I’m a full-blown sashimi man these days!

“Gluten-free” is usually a cue for “highly-processed, low-quality, over-sweetened junk”

This is especially true for any baked goods. For example, take a look at the ingredient list for some Gluten-Free Cake Mix:

If you feel the need to occasionally Off-Road Nutritionally, pick a recipe out of one of the popular Paleo cookbooks instead of reaching for a fake, heavily processed food.

You’re fine now, but how about when you’re older?

Unfortunately, our ability to digest certain foods drops over time and our propensity to develop food intolerances and immune dysfunctions increases over time as long as that exposure is still there. This means that it’s not only smart to avoid the foods that make you less healthy now, but also later in life when you would ordinarily have more trouble with digestion. Also, remember how I mentioned that development of autoimmune conditions like Celiac require a genetic cue and an environmental cue? You better believe that you become more susceptible to these conditions the more grains you consume as your digestion worsens.

And lastly, even “properly prepared grains” can only effectively reduced one or two of several problematic compounds found in the grains. It seriously is better to just avoid them all together.

Hopefully I’ve given you enough information (without making your head explode) to explain to your friends that you’re not following some trendy gluten-free diet, but are investing in your health now and for the future. By eliminating the consumption of all grains, you really can improve your quality of life immediately by removing a number of potentially problematic compounds.

Badier Velji runs The Lazy Caveman Health and Wellness in beautiful Mountain View, CA. In addition to coaching personal clients, he is active in the SF Bay Area Paleo community, runs the Nutrition Program at CrossFit Palo Alto and is a moderator at the Robb Wolf Forums.

If you’d like to get started on changing your life today, email him at contact@thelazycaveman.com.