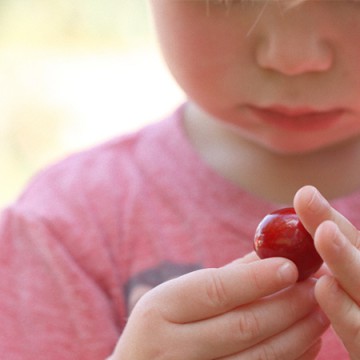 By Dallas and Melissa Hartwig, whose 16-month-old eats more than your mom.

One of the most common questions we’re asked (usually by parents, but sometimes by overachievers hoping to become pregnant) is, “How do you feed your kid?” Now, one of the things we’ve come to realize over the last year-plus is never ever ever give parenting advice unless it comes from your own personal experience. And even then, you should probably not give parenting advice.

So, a few things. One, we didn’t want to tackle this question until we had some solid experience actually feeding a real, live child. Two, this is not parenting advice. Only you can decide how and what to feed your child, and what we did with our kid isn’t what you should do with yours. Three, always include your pediatrician or family practitioner in the conversation when it comes to your child’s diet and transitioning them from breast milk or formula to real food.

First, the vast majority of major health organizations (like the World Health Organization, American Academy of Pediatrics, American Academy of Family Physicians, and Health Canada) recommend waiting until baby is six months old—not four to six, as you may have heard—before introducing solids. In addition, many experts (including the Weston A. Price foundation) recommend that mothers breastfeed for the first twelve months, slowly transitioning from milk to solid foods between six months and one year old. (Even if your baby is formula fed, you should still wait until six months before introducing real food.)

Prior to six months, your baby’s digestive system may not be ready for solid foods. Their “open gut” (similar to “leaky gut” in adults) means that larger proteins from real food may cross through the gut barrier into the bloodstream, triggering an immune response and increasing the likelihood of food allergies and possibly autoimmune conditions. In addition, younger babies may not be developmentally ready for real food, unable to properly move food around in their mouths. 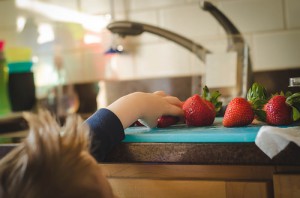 Why might you introduce real food earlier? If your baby continues to demand more breast milk than you can supply (common during the six or nine month growth spurts), you might be faced with the decision of introducing solids or introducing formula. In that case, you’ll have to decide whether your baby is developmentally ready for real food, or whether you’ll want to use some kind of formula (traditional or alternative) as a dietary supplement.

Note: Many experts say that it’s time to start babies on solids when they express interest in real food. We’re not sure about that—our kid wanted to put everything on our dinner plates in his mouth all the time, but that didn’t mean he was ready to eat a steak. Babies are curious by nature, so make sure this isn’t the only marker you’re using to determine whether or not your baby is ready for solids.

On the other end, the American Academy of Pediatrics found that there is no benefit to purposefully delaying the introduction of solid foods past six months, saying, “There is no current convincing evidence that delaying their introduction beyond this period (six months) has a significant protective effect on the development of atopic disease.” So you can wait beyond six months if you choose (or if your doctor recommends it), but waiting isn’t necessarily better.

So what should you feed your baby when it’s time to introduce solids? A quick Google search will give you 13,523 different answers, all of them contradictory. Here’s where you, your doctor, your baby, and your instincts need to work together to arrive at an approach that’s right for you. However, let’s talk about some options from the experts.

Skip the cereals. The traditional approach is to use pureed vegetables, fruits, and cereals as baby’s first food. For so many reasons, we’re not even going to entertain the idea of cereals. What’s good for us is also good for our children—and the negative health consequences we experience eating certain foods can also apply to babies. Plus, vegetables and fruits are far more nutrient-dense anyway, and your baby needs calories and micronutrition to grow up healthy. 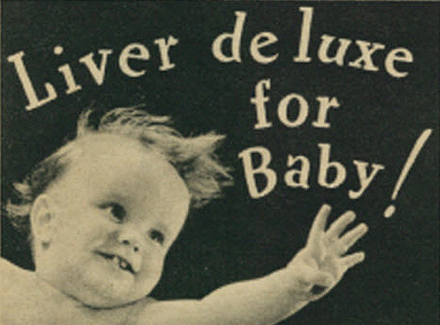 Real foods first. Try introducing simple, easy to digest real foods first. Good first foods include hard-boiled mashed egg yolk (mixing it with breast milk makes it easier to swallow), avocado, beef liver (pureed or grated frozen), and mashed banana. To be safe, try introducing just one new food at a time, allowing a day or so to see how your baby reacts.

Note: Not all babies do well with these “best” first foods. Our son, Atticus, threw up egg yolk the first two times we tried (but tolerated other foods), so we’ve avoided eggs ever since. This doesn’t mean he has an allergy, necessarily—only at this age, in his context, egg yolks aren’t working for his digestive system. Because they are such a nutrient-dense food, we’ll continue to reintroduce every 3-6 months in small quantities and see if there comes a time when he tolerates them well.

Interestingly, the Canadian government recommends starting babies on iron-containing foods—namely, meat, seafood, and eggs—at six months. If you’re going to introduce beef, lamb, chicken, or salmon at this stage, a puree will probably be the easiest for your baby to handle. (Pureed foods help him or her learn how to move food from the front of the mouth to the back, as opposed to just spitting it out straight away—which might happen for a few feedings).

Move onto whatever nutrient-dense foods you choose. When you and your baby are ready, move on to whatever vegetables, fruits, meats, and natural fat sources you choose. Some examples of early foods we introduced include roasted carrots, sweet potato, coconut milk, ground beef, shredded pork, salmon, mahi mahi, butternut squash, coconut oil, ghee, applesauce, blueberries, plantains, and spinach.

Purees may still be your baby’s preference, as texture is often an issue with younger kids. (Keep trying foods, though—you might find your baby doesn’t like the texture of avocado at six months, but loves it at eight.) You can buy pre-packaged organic purees from companies like Plum Organics, Peter Rabbit Organics, and Happy Baby Organics, or make your own using a food processor or stick blender.

Note: We love EZ-Squeezies! We made our own baby food blends and used them with these refillable pouches—less waste, and much cheaper. 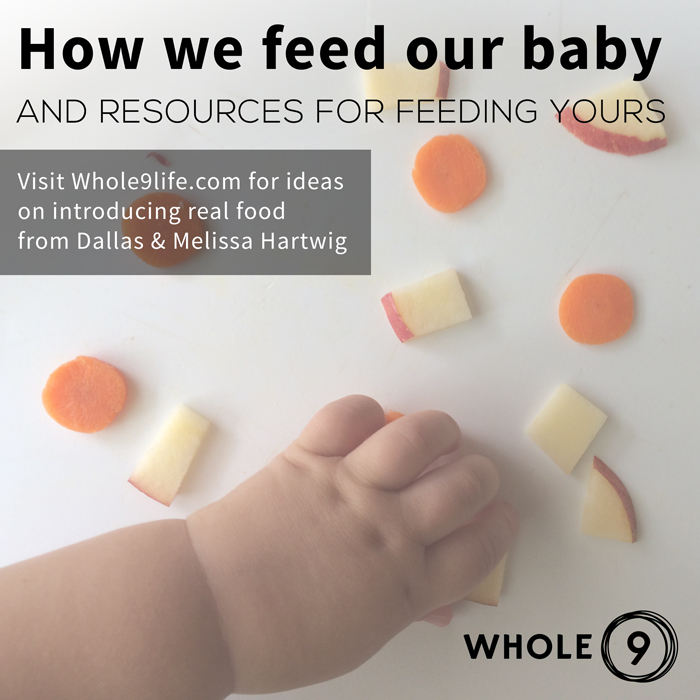 However, you also don’t have to stick to purees at all. Atticus was eating raspberries, lightly mashed sweet potato, and chicken sausage at the six or seven month mark. Just choose foods that are nutritious, and don’t contain any of the potential gut- or immune-disrupting compounds as outlined in It Starts With Food. You can also start mixing and matching foods whenever you’re ready, including fruit and vegetable blends or meals that contain more than one food group.

Note: The only downside of including a lot of variety early on is that if your baby reacts negatively to a meal (digestion issues, skin disruptions, etc.), it may not be easy to determine which food was the culprit. Play this one by ear—and remember that if your baby is still being breast fed, that is still his or her primary source of nutrition, so you can afford to introduce solid foods more slowly and carefully.

You may not need to delay certain foods.The American Academy of Pediatrics released a clinical report in 2008, which raised serious questions about the benefits of delaying the introduction of solid foods that are thought to be highly allergenic (like fish, eggs, or nut butters) until the child is at least one year old. Further studies are needed, but unless your doctor says different, you can try things like shrimp, egg whites, or sunflower seed butter with your six to twelve-month-old.

A Day in the Life

So here is a sample day for Atticus, at 16 months old.

Note: While our meal planning recommendations call for three meals a day with no snacks, that doesn’t work for most kids. They simply cannot eat enough in just three meals, so we generally plan for three meals and two snacks a day. We’re also on a policy that if our kid is hungry, we feed him. Period. Some days, he eats nearly as much as a blue whale, but we’re not worried. He’s active, he’s growing, and everything he eats is nutrient-dense with built-in satiety signals. When he’s full, he lets us know he’s done, and if tells us he’s hungry (he’s got sign language for that), he eats.

Note: Our kid tends to front-load his meals, with breakfast being the largest meal of the day and dinner being relatively small. Given cortisol and leptin’s normal daily rhythms, this pattern is pretty hormonally normal. We find it interesting that he intuitively gravitates towards this meal structure.

Note: These approaches are not 100% paleo—but they are all based on whole, nutrient-dense, unprocessed foods. Use your own judgment to exclude any foods you feel are not right for your baby.