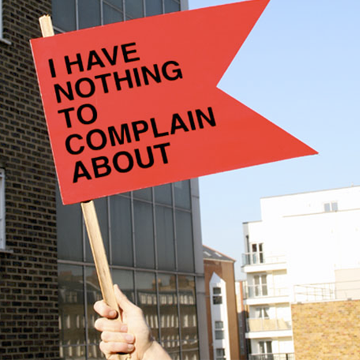 At the beginning of the year, Melissa Hartwig got wind of a “no complaining” challenge circulating on her social media feed. The rules were simple enough—no complaining of any sort for a full thirty days. No “traffic was brutal today,” or “My boss is a jerk,” or “I look fat in these pants.” Just a month full of sunshine, ponies, and rainbows coming out of her mouth. (Well, not likely—but she hoped she’d at least learn to create a new way to process and deal with stress and trying situations).

Seemed easy enough, and the payoffs seemed apparent: less negativity, more happiness, and the creation of a new awareness of potentially damaging behavior. She started a fresh journal page, announced her commitment to her family, and began.

Here is her log for the first four days:

Saturday: Complained that Dallas took too long to pick me up from the winter market, when I told him exactly where we were standing. Complained that I was tired. Complained about having to make actual food for dinner when I just wanted to eat popcorn and fruit.

The Habit of Complaining

As Melissa discovered, preventing yourself from complaining is no easy feat. For most of us, complaining has become habit—something we do automatically, without even thinking about it. (In fact, Melissa said it wasn’t until a few minutes after expressing the above sentiments that she even realized they were, in fact, complaints.)

We complain for lots of reasons—maybe our parents told us to “get it out” and not bottle up our emotions. We look for validation and agreement from others; your partner saying, “Yeah, your boss really is a jerk” helps us to believe our opinion is right (and there’s little the brain likes more than being right). We also complain to avoid taking responsibility for our own actions. Yes, you had a lot of meetings and calls today—but you’re the one who added them to your schedule. You could have said no, delegated, or moved your schedule around, but you chose not to. But it’s easier to simply complain about your situation (passive) than make actual change (active).

Just because we’ve created a bad habit around complaining doesn’t mean we can’t change, though. As with any habit (a new diet, creating an exercise routine, or practicing meditation), ceasing to complain takes dedication, awareness, and an ongoing shift in action.

Still, though, what’s the big deal? It feels good to express your unhappiness, and everybody does it… so what would we get from ceasing our own complaining?

For one, you’re generally just a nicer person to be around when you don’t complain all the time. No one likes hanging out with a Debbie Downer, and your complaints may be raining on everyone’s parade. Yes, it’s still winter. Yes, your co-worker chews very loudly. Yes, your server is taking a really long time to bring your food. But does it benefit your relationships to constantly point these things out to your friends and family?

You’ll also learn to find the up-side in small situations that used to bother you. Stuck in traffic? A great opportunity to catch up on the Go Fork Yourself podcast. Workout not go so well? Your body is telling you to take a rest day—thanks, legs! Long line at the bank? Great chance to call Mom. Are these petty annoyances really worth complaining over, ruining your present moment (and the present of those around you)? Learning to let more small things roll off your back could prove immensely helpful for your general happiness.

Finally, not allowing yourself to complain forces you to take responsibility—and take action to actually make the situation better. Leave earlier the next time it rains, or take public transportation. Speak up for yourself with your rude boss, or find another position. Clean up the house yourself, or impose a daily fine until your kids do their chores. Complaining doesn’t actually change the situation—your attitude and actions, however, will.

No Complaining for Just One Day

If you want to do better at your own “No Complain” challenge than Melissa did with hers, it will have to start with awareness. Spend one day just noticing all the times you complain. Don’t try to change anything just yet—just be on the lookout for complaints. Make a note of every time you complain, and everything you complain about. (You may be surprised at how often you’re writing things down!)

The next day, make a point to think before you speak, and do something other than complain when you’re feeling cranky. You won’t be able to stop yourself from thinking the negative thought (that only comes with practice), but you can at least stop yourself from verbalizing it. Find a way to turn the situation into a positive, or take action and do something about what’s bothering you.

If you fumble and stumble the first few days, don’t worry. Any new habit is hard to implement at first. Finding a cue to associate with the habit (like an elastic around your wrist or a post-it note on your phone) can help you establish a new behavior, and being on the lookout for your rewards (a happier mood, appreciative friends, or the resolution of a long-standing conflict) will help you solidify the new routine.

If you can make it through an entire day without complaining, congratulations! You’re well on your way to succeeding at an impressive personal development goal—and we’re pretty sure there is no aspect of your life that won’t benefit from your happier, healthier, sunnier disposition. If you hated this article and think we’re stupid for even suggesting this, don’t bother complaining about us your co-worker… just leave a message in comments below.