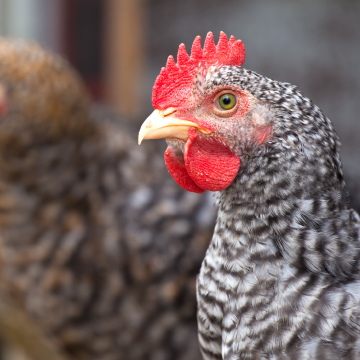 While browsing at the Salt Lake City Farmer’s Market, we met some folks who own a small chicken farm a few towns away.  They seemed to run the kind of farm we look for when sourcing our own food, so we spent some time talking with them about their chickens, their feed, and how they handle their processing.  We told them about what we do, and how we encourage others through our work to make ethically responsible animal protein choices. Towards the end of the conversation, they invited us out to the farm for a visit in the spring… and, if we wanted, to witness a slaughter.

Given that I spent more than 20 years of my life as a lacto-ovo vegetarian, I’ve come a long way with meat. As I learned of the profound health-promoting effects of eating well-raised, naturally-fed healthy animals, I transitioned fairly easily to eating more flesh. I started with “easy” meats like chicken and salmon, but quickly discovered my love of real meat: steaks, chops, ribs, shank, loin, marrow, heart. Depending on the cut, my preference is often to eat it rare. As part of a personal growth project, I took a beef butchery class at 4505 Meats, and plan on doing some deer or elk hunting later this year.

We write and speak about the health and ethical issues related to the use of animals as food. I feel deeply that it is a moral imperative to treat animals in a respectful and humane way, and that this imperative is not negated by the fact that, in the end, we kill and eat some of these animals. The horrors of industrial production of meat animals is a topic for another day, but relevant  for that discussion is the concept of voluntary ignorance about the methods used to raise and kill our meat animals. Factory farming would not be successful without its invisibility to the public, and without purposeful deception and widespread abuse by large corporations like Smithfield or Tyson. These profitable corporations routinely treat your future food in a manner that they’d be arrested for if they were doing it to your dog or cat. That should give you some pause.

However, it’s not just the “evil corporations” that carry the responsibility here. The consumer is also to blame, since the consumers’ collective lack of demand for transparency has allowed the development of a clandestine, inhumane meat production system. Several US states have passed laws that prohibit photographing or recording in meat production facilities. Passed under the ridiculous guise of “food safety”, these laws obviously serve to shelter the abuses of industrial farming operations from public scrutiny. In many cases, we consumers prefer ignorance to the harsh, ugly reality of where more than 99% of our meat comes from.

The other major consideration here is the financial one. Americans spend the smallest percentage of their income on food of any country in the world. A few decades ago, Americans spent three or four times as much on food (by percentage) as they do now. So consumers demand cheap meat and are willing to turn a blind eye to how that meat is produced, and unscrupulous companies are willing to produce and sell large amounts of that industrially-produced meat to consumers at progressively lower prices—but at great cost.

One way out of the quagmire is demanding transparency in food production, and becoming personally involved (to the degree that is possible) in each of our own food chains. If the purveyor won’t tell you how and where their animals are raised, don’t buy their products. And if the farmer refuses to let you visit the farm, don’t support that farm. It is not exactly fun to ponder (or personally observe) the reality that a living, breathing animal must die so that we may be optimally healthy and robust, but that does not negate that reality. After all, look where avoiding the realities of farm animals’ lives and deaths has taken us. Being more personally involved in and connected to the source of my food allows me to both improve the quality of my own food, and to positively influence the food production system by “voting with my fork” (thank you, Michael Pollan).

All of this has been a preamble, I suppose, to why I feel compelled to actually observe the life and, at times, death of some of my food. Admittedly, I have little tolerance for the justification of “I just can’t handle seeing animals die.” If you voluntarily choose to remain ignorant of the realities of food production, do you deserve to partake in the animal whose life was taken? Yes, to many of us, killing animals is distasteful and ugly and messy and emotionally disturbing. But the personal discomfort that we may experience as a result of genuine personal observation of reality serves to emotionally and spiritually connect us more deeply to our food, our world, and those loved ones that we share this Good Food with. The longstanding deficiency of that deep-rooted connection to the animals we eat has facilitated the construction of an entirely immoral food production system. We cannot afford—as an individual or a society—to continue to turn a blind eye to that inhumane system. As Gandhi notes, “You can judge the morality of a nation by the way the society treats its animals.”

My personal response to that immorality is to demand transparency, and bear witness to not only the animals’ life, but its death. It may make me uncomfortable or sad, but more importantly, it also makes me deeply thankful for and respectful of the animals that I eat. I’m not saying that everyone (or myself, for that matter) needs to participate in or observe the slaughter of every animal they eat; that is neither practical nor necessary. But refusing to emotionally confront the most uncomfortable aspect of eating animals seems deeply disrespectful to me. Open your eyes, and look into your food’s eyes. It will make the world a better place.

Dallas’ perspective above was eloquent and impassioned. Mine is far more plain-spoken and practical, but just as valid.

I have a tenuous relationship with meat.  As mentioned in our Primer for the Meat-Challenged,  I was a mostly-vegetarian for a long time, driven by conceptual challenges and texture issues.  The gristly, sinewy consistency of meat, combined with the slightly repellent idea of eating flesh, has made it difficult for me to be an omnivore. Don’t get me wrong, I enjoy a good steak… once or twice a year. I have to be in the right mood, it has to be the right cut, and it especially has to be the right temperature. (Unlike Dallas, I most definitely do believe there is such a thing as “too rare.”)

I eat meat less because I like to and more because I have to—because I believe that meat is a necessary part of an optimally healthy diet, and above all, I want to be healthy. Because of what I know about plant-based protein sources (sub-optimal at best, profoundly damaging at worst) and the health benefits of animal products, I’ve worked hard to overcome my issues with eating animals. I stick with meats that look less like flesh (think burgers versus steak), I prepare them in ways that make it easier for me to eat them, and I’m not very adventurous. (Lamb is still not okay, and meat on the bone remains a challenge.)

It is important that I acknowledge the reality of where my burger comes from. The meat I eat to be healthy came from a live animal that was killed just so I could eat it. I am acutely conscious that the animal once lived, then was slaughtered,  and ended up my plate. I do not deny the reality of what it means for me to eat meat. I research the living conditions of my animals, the food they are fed, the method in which they are killed. I’ve visited my farms, watched videos of both humane and inhumane slaughter processes, and read books that graphically spell out the torture employed by this country’s factory farming operations. I am as invested in the process of eating animals as I can be—but I can go no further. I draw the line at watching someone actually kill my animal, my food.

Should I bear witness to the slaughter, there is a high probability that I will be unable to eat meat ever again. I know this from past experiences–gagging on pork that I first watched roast whole on a spit, passing on freshly killed elk because of the blood running down the inside of the Ziploc bag, losing my taste for an expensive grass-fed ribeye because I bit into a small patch of gristle. I must distance myself from the living, breathing source of my food, or I risk my already shaky hold on an optimally healthy meat-eating existence. And for the sake of my health, which directly impacts my family (especially my son), I cannot allow that to happen.

I don’t believe one must personally bear witness to slaughter to be an ethically responsible omnivore. Burying one’s head in the sand is one thing—denying the horrors of factory farming or supporting that system out of purposeful ignorance is indefensible. I am not denying what it means to eat a chicken breast for dinner. I am involved in my food chain, and I have never shied away from the hard truths about what it means to eat animals. But while I admire Dallas’ willingness to expose himself to every aspect of his decision to eat animals, I cannot bring myself to join him in this venture of witnessing a slaughter. The risk—the very real potential that the experience will snip the remaining  thread between me and my ability to consume animal flesh—is simply too great.

Do you believe that we should all be willing to bear witness to every aspect of our animals lives and deaths to be a truly conscientious omnivore? Or is it enough to simply educate ourselves and make ethically defensible decisions, without personally experiencing every aspect of the process? Leave your thoughts in comments.