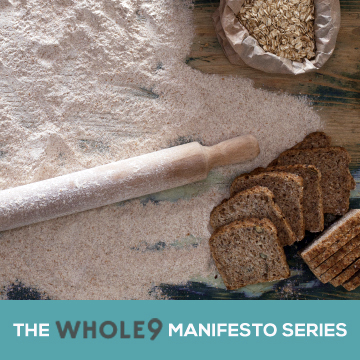 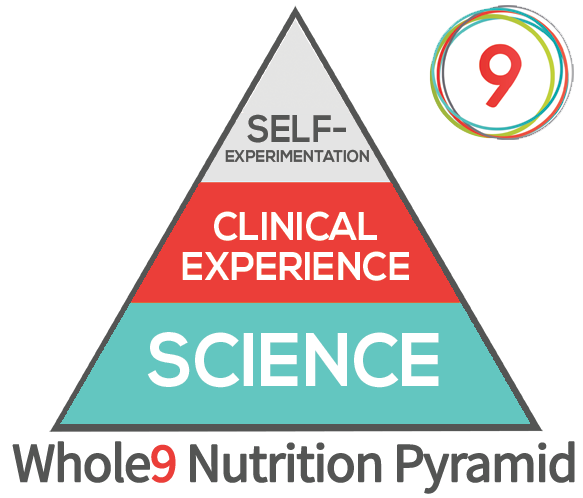 Based on the science as we understand it today, and our vast clinical experience with the tens of thousands of people who have completed our Whole30 program, we make some general recommendations as to which food groups may make you less healthy—including grains. Below, we’ll outline the basics of our case against consumption of grains as part of your daily diet. But until you undertake your own self-experiment (via the Whole30) for yourself, you’ll never know for sure how consumption of grains are affecting how you look, how you feel, and your quality of life.

Our general nutritional recommendations don’t include grains of any kind—no breads, cereals, pasta, rice, not even gluten-free grains or pseudo-cereal. No, not even whole grains.* While grains are technically seeds of plants in the grass family, for our purposes we’re going to lump similarly-structured pseudo-cereals in this category as well. This list includes wheat, oats, barley, rye, millet, corn (maize), rice (including wild rice), sorghum, teff, triticale, spelt, kamut, buckwheat, amaranth, and quinoa.

*Note, we are well aware that this information may run counter to everything you’ve ever been told by your parents, doctors, personal trainers, government agencies and TV advertisements. For that, however, we make no apologies… because all the people who have been selling you Whole Grains for Health all these years have been just. Plain. Wrong. We understand if this makes you kind of angry. It makes us angry too.. but that’s a topic for another post.

During the refining process, the bran and the germ portion of the grain seed are removed—and so are the fiber, vitamins, and minerals present in those two layers. Any nutrients added to “fortified” grains don’t make up for what is removed during the refining process. These grains (usually refined wheat and corn) are then turned into junk and snack foods.

As critical satiety factors are missing (fiber, water, and complete protein),and calories are concentrated (making them easier for our bodies to absorb), these foods are easy to overconsume, and tend to promote cravings, blood sugar dysregulation, and unhealthy metabolic effects.

While whole grains leave the bran and germ portion intact (increasing the fiber and micronutrition content compared to refined grains), they are far from nutrient-dense when you compare them to vegetables and fruit.

In a comparison* done in our New York Times bestselling book, It Starts With Food, a daily diet based on “healthy” whole grains provided more than three times the sugar and sodium as a diet featuring vegetables and fruit, but provided less fiber, potassium, and substantially less magnesium, iron, zinc, and vitamins A, B6, B12, C, D, E, and K.

In addition, many of the minerals technically present in whole grains are not accessible to the body, thanks to anti-nutrients called “phytates” found in the bran.  These phytates grab hold of minerals like calcium, iron, zinc, and magnesium found in the whole grain, creating an insoluble and undigestible complex. As these nutrients are no longer in a usable form, they are not absorbed into the body—and you don’t get the benefits. (If you can’t use the minerals, they may as well not even be there.)

There are different protein structures in grains that have been found to create transient increases in gut permeability. These problematic proteins are particularly resistant to digestion, meaning they arrive in the gut largely intact. They can improperly cross the gut barrier, and may allow other substances (like incompletely-digested food particles, bacteria, or viruses) through the gut and into the body, all of which triggers an immune response and promotes systemic inflammation.

One such class of profoundly problematic proteins belongs to a group called prolamins. Gluten, a protein found in the wheat, rye, and barley, is partly made up of prolamins (in wheat, for example, that prolamin is called gliadin).

Non-gluten grains (like corn and oats) contain different prolamins (and other compounds) that may be similarly irritating. While these protein fractions and compounds have not yet been as well studied as gluten, it’s fair to say that they have a significant potential to create similar undesirable effects on your gut function and immune status.

The interaction between foreign proteins and immune cells triggers an inflammatory response of varying degrees of severity, depending on the individual. (There is considerable person-to-person variation, though the research on individual sensitivity is still fairly incomplete.)

The inflammatory effects can show up anywhere, as anything: allergies, arthritis, asthma; autoimmune diseases like celiac, Crohn’s, lupus, multiple sclerosis, and Hashimoto’s thyroiditis; chronic fatigue, fibromyalgia, ulcerative colitis, diverticulitis, psoriasis, eczema, rosacea, endometriosis; these effects can even be seen in the brain. (Inflammatory messengers in the brain are associated with depression, anxiety, and even conditions like bipolar disorder and schizophrenia.)

What About Soaking, Sprouting, and Fermenting?

These preparation methods don’t guarantee a safe food product in your gut, and vegetables and fruit still provide far more nutritious benefits with none of the downsides of grains.

What About Gluten-Free Products?

Please refer to our articles on gluten-free grains and products:

These manifestos are not intended to be a comprehensive dissertation of our research or recommendations. For more information on the psychological impact of our food choices, the effects of grains on health, and scientific references used to support our position, please refer to our book, It Starts With Food.