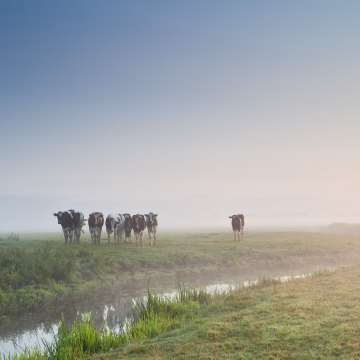 Author’s Note: If you are new to our site, please read the preface to our Conscientious Omnivore series first. We know this stuff isn’t easy, and we know you can only do the best you can with the resources and capacity you have. But it’s important for you to know where your Good Food comes from, and to be able to make educated, informed decisions. Our intention isn’t to shock, shame, or bully you—merely to show you what the factory farming system works so hard to keep its customers from knowing. Apply this knowledge how and when you are ready (and read the rest of our series for more information on how to do just that).

Pork might be one of our most beloved meats—just whisper the word “bacon” and you can expect a crowd of fanatic omnivores knocking down your door. There are a lot of misconceptions about pigs—that they’re stupid, dirty scavengers. But did you know that pigs are actually incredibly clean creatures? Given the opportunity, unlike most other farm animals, pigs will designate different areas for bedding and waste. They’re also smart (maybe even smarter than your dog), playful, social animals that love to roam and forage; their snouts ever-searching the earth for food while traveling up to several miles per day.

Unfortunately, conventional farming (factory farming)—which produces over 97% of pork in the U.S.—fosters an environment which completely removes pigs from their natural diets, behaviors, and social structures. 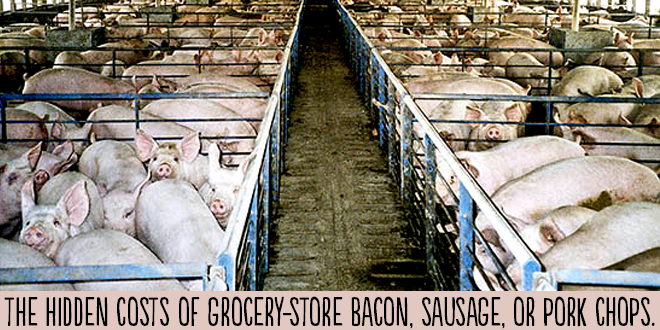 Factory farms are not nurturing environments that flow with the changing seasons, supporting the natural cycles of life and death and growing strong, healthy animals.  Annually, over 100 million pigs are raised and slaughtered in the United States in order to facilitate the average American’s pork consumption of 44 pounds per year. The staggering majority of these pigs endure inhumane living conditions that lead to a host of health problems and, undoubtedly, a miserable quality of life.

When allowed to live naturally, sows (female pigs) spend the majority of their day grazing, walking or rooting, and only about 6% of their time lying down. In the factory farming, system, however, breeding sows are confined to gestation crates—metal confinements barely larger than their bodies—for the majority of their 4-month-long pregnancies. Their piglets are weaned after a few weeks, and sows are usually impregnated again right away, often reliving the pregnancy-birth-impregnation cycle continually for 3-4 years before they are slaughtered.

Gestation crates impair sows’ health by restricting exercise and forcing them to urinate and defecate where they stand. These conditions can eventually lead to respiratory disease, cardiovascular problems, digestive issues, and severe urinary tract infections. Sows held in such stalls also show signs of severe psychological distress and frustration, biting the bars of their cages and exhibiting behavior similar to clinical depression. 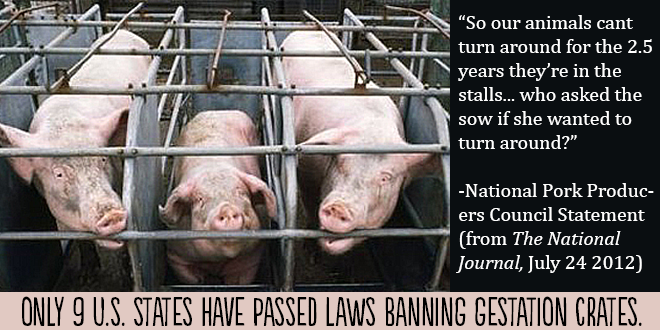 Even those factory-farmed pigs not in gestation crates spend their lives, from birth to slaughter, inside. They never once feel the sun on their face or the earth beneath their feet. Instead they live in overcrowded metal buildings with bare, concrete slatted floors, often with no straw for bedding due to the difficulty and cost of keeping it clean. This type of confinement often leaves these normally intelligent, playful, active animals bored, sedentary, and unable to engage in normal social behaviors.

Boredom and inactivity leads to aggressive behavior such as nosing or biting other pigs. This abnormal aggressive pig behavior has become so commonplace that piglets’ tails are routinely docked (sliced off) and their teeth clipped to minimize the damage they cause to one another in crowded pens.

Pigs are natural omnivores whose snouts are designed for rooting and foraging. Left to their own devices, pigs will seek out things like roots, mushrooms, fruit, grasses, rodents, snakes, and insects for food.

Pigs raised on a factory farm, however, are not fed their natural diet. Even though pigs thrive on high-fiber diets, conventional farming provides them with finely ground, low-fiber diets in order to reduce feed costs. This unnatural diet makes pigs prone to gastric ulcers, among other health issues.

Factory-farmed pigs are also routinely given feed additives (similar to human steroids) to help them grow quickly and leanly, and antibiotics to combat the myriad of health issues that arise from their poor living conditions. In fact, in the US, 80% of the antibiotics sold in 2009 were for use on livestock and poultry—not humans. 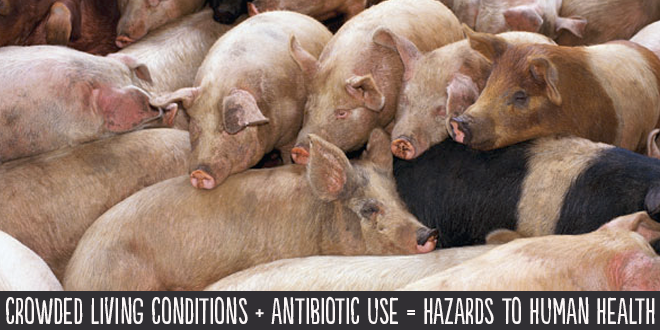 The sheer volume of antibiotics being used may pose serious risks to public and environmental health, primarily because it may contribute to antibiotic resistance in pathogens that cause illness in people. Up to 90% of all antibiotics used for humans and animals are not fully digested or broken down, leaving them to pass through the body and enter the environment intact through waste. Once in the water, these drugs can get into people.

Evidence suggests that this over-use of antibiotics is helping to spread drug-resistant strains of diseases such as MRSA (Methicillin-resistant S. aureus), salmonella, campylobacter, and E. coli, which can cause humans serious illness and death.

The environmental impact of these large-scale factory farming operations affects not only the pigs and those who work there, but the towns in which these farms are located. Toxic gasses from large-scale factory pig farms cause neighboring residents to suffer from headaches, sneezing, stuffed nose, burning eyes, neurological, respiratory and intestinal diseases. The runoff from pig factories creates nutrient overload, causing huge fish kills in rivers and coastal waters.

And then, there’s the poop. 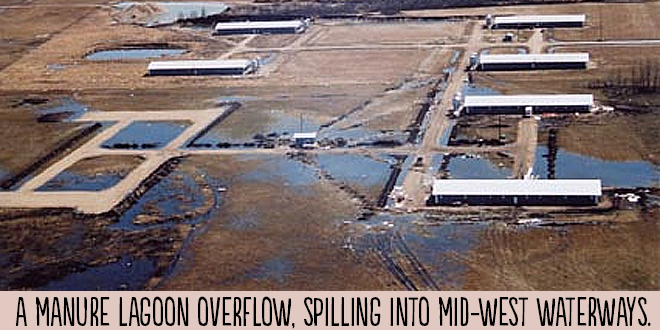 A factory farm with 5,000 pigs produces about 25 tons of raw fecal waste every day. Pastured animals stagger their manure across acres of grass, but how do factory farmers deal with the waste of thousands of animals held in CAFOs (confined animal feeding operations)? In the U.S., the manure (containing high levels of nitrogen and phosphorus) is pumped into nearby open-air lagoons or tanks, or sprayed onto nearby fields. This has polluted the environment and harmed both human and ecological health.

Happy, healthy, responsible-raised pigs are pigs that can express their natural instincts, dietary habits, and social behaviors. Pigs’ most natural state is to roam freely with other pigs in an open, un-crowded, pastured area with the ability to root about for food, socialize, and maintain their normal standard of cleanliness. Raising pigs in this manner eliminates the health concerns, environmental damages, and even the aggressive behaviors that require inhumane practices such as tail docking and teeth clipping. 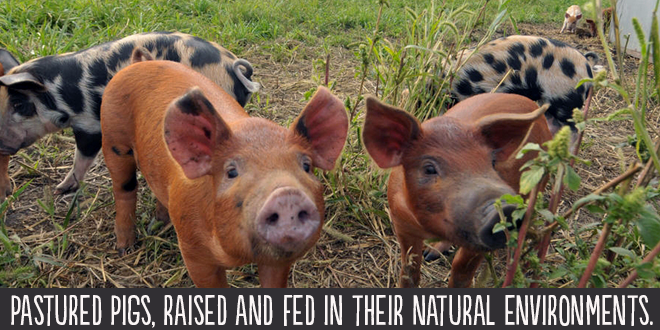 As a Conscientious Omnivore, there are several steps you can take to ensure that you are purchasing and consuming humanely-raised, healthy, sustainable pork.

Questions about how to become a more conscientious omnivore? Resources for sourcing healthy, happy pork? Leave your note in comments below.