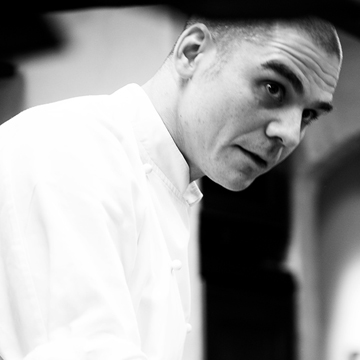 Michelin-starred chef Thomas Rode Andersen is only the third head chef at Denmark’s Kong Hans Kælder since the restaurant opened in 1976. He has worked at top restaurants in Denmark (Falsled Kro at Fyn, Fakkelgaarden in Kollund), in Germany (Chez Paul in Flensborg) and Austria (Lebzelter Obauer in Salzburg). He recently took part in writing the book “3 Stjerner” (Three Stars) about all the restaurants awarded 3 stars in the Michelin guide in Europe, and he has also written his own cookbook, “En Kogebog,” and the recently release Paleo book “Stenalderkost.”

Thomas is also well-recognized advocate for the Paleo lifestyle in his country. Whole9 recently sat down with this renegade chef to find out more about his restaurant and his experiences with eating and cooking Good Food.

How did you discover a Paleo diet, and how has it changed your life?

I was introduced to Paleo by a friend who suggested that I make some final tweaks to my health and fitness by cutting all sugar, starchy foods, and industrially produced food from my diet.  He gave me some books to read and I was thrilled and convinced that this would be my future lifestyle. It totally made sense – eat what we are designed to eat, in the context of the modern world.

The true catalyst were my uncontrolled energy levels. They made me crazy. It was a question of surviving on good old back bone and a serious burst of adrenaline. Now my energy level is rock steady. Those stupid, and logistically inappropriate food cravings are history, and hunger in its pure and easily controlled form are ruling along with a huge mental reserve, making it easier to be a good colleague, husband, father, and friend.

Tell us about your background as a chef, and about your restaurant, Kong Hans Kælder.

I got my certification as a chef in 1990 and have been working in many very nice Michelin-awarded restaurants in Europe ever since. In late 1996 I was assigned Headchef and Director of Kong Hans Kaelder in Copenhagen, maybe the most important and respected gourmet restaurant in Denmark. I was just 28 years old and the head of a restaurant with an undisputed reputation and on only two predecessors taking the “office” before me since the opening of the restaurant in 1976. In my business, you don’t see that very often.

How have you implemented Paleo diet principles at Kong Hans? Do you advertise as “Paleo?”

We do not officially advertise as Paleo, but I would love to when we have everything set up properly. As a chef, you need to evolve and reinvent yourself all the time, which sometimes is a little difficult, as chefs do not necessarily prioritise health. Through the years we’ve been cooking international gourmet food with a heavy emphasis on our region, using a lot of local produce. Health was never a thing I thought about; the food just had to be perfect and tasty. The food I ate myself just had the purpose of filling my stomach, and sometimes it was tasty, but I never thought about any health factor.

As I started to progress rapidly in my training and personal well-being, my emphasis on both the food that I ate and the food I cooked for my guests changed dramatically. Slowly the menu evolved, partly on its own towards Paleo. We try to do our menu and our a la carte choices as Paleo as possible by focusing on the absence of starch, sugar, chemicals, alcohol, and industrially-produced ingredients. We use very little honey, some stevia, and fruits and berries to create desserts. My very clear goal is to be able to cook a proper Kong Hans meal as sensory-awarding as it has always been, but with the right ingredients – the ones we are designed to eat.

What are the challenges of creating Michelin star-worthy dishes while following a Paleo template?

Customers who have heard about the Paleo diet, but are skeptical, will most likely be positively surprised. They probably think that the “diet thing” will make the food boring, but its nothing like that at all. Primarily the biggest challenge is to create a proper finish on a big gourmet menu, where people tend to expect a sweet end. Although the better restaurants, especially here in the Nordic countries, have had a tendency lately to create desserts focusing more on a nice balance between sweet and sour on the palate, they still use a lot of sugar. Usually we explain to our guests the proper context to make sure that they understand the set-up, and thus give them the opportunity to choose a dessert with or without sugar.

What are the reactions of your guests when they discover they’ve eaten their first Paleo meal? (Do they even realize something about their dining experience was different? Do you tell them?)

They are usually very surprised in a positive way, but off course there are also guests who don’t understand the concept. But as I mentioned earlier, it’s only regarding the desserts. We will most certainly also encounter reactions when we take away the bread in 2013.

What foods or beverages do you still serve that aren’t considered Paleo? Could you see a gourmet restaurant like Kong Hans offering a 100% Paleo dining experience in the future?

We still serve bread, but that’s on its way out, and until we have the proper time to rework proper sugar free desserts, we will also have to serve desserts. We will never be able to stop serving wine, but at the moment I don’t see the problem. As I live Paleo on an 80 – 20 % or maybe even 90 – 10 % ratio, I see a dining experience at Kong Hans the same way. Eat properly and sin a bit with a beautiful and perfectly paired glass of wine.

For me the thrill is to create a meal contrary to what people might expect from a place like this. A sensorial, fulfilling, and satisfying meal made of real, healthy, raw materials. It would be interesting to create a whole new Paleo dining experience, but in another venue. Kong Hans has too much history to do a total change of the concept.

Tell us about your other projects, and your TV show.

Aside from my “daytime job” I’m doing a lot to promote the Paleo lifestyle here in Denmark. Over the last couple of years I’ve gained the reputation of being Mr. Paleo. I’ve done numerous interviews for magazines, newspapers, and on TV. Furthermore, my second TV show (I made 230 episodes of the last show) is on the air this fall. I’m cooking with two Danish celebrities, trying to help them get a proper meal out of whatever ingredients they are using.

My first Paleo book Stenalderkost (translated as “Stone Age diet”) was released in October, and is a huge success in Danish measures. I’m planning another book as soon as I’m able to get to it. I would love to write it with focus on both Paleo 1.0 and 2.0, and include scientific material to back up the whole Paleo story, as my first book is primarily based my own experiences. I even thought about going to the states for a month and writing it over there. Get a crew together, rent a lodge or a mountain cabin, order a truck load of the finest raw produce, and then just cook and shoot the whole story right there on the spot. That would be great, but who knows.

What do you see for the future for Paleo in Denmark?

At the moment it’s exploding, and everybody is raving about the Paleo lifestyle. It seems as if everybody is really excited to achieve their full potential and be the best versions of themselves. From where I stand, it’s amazing to experience. I have never tried to be in the middle of the “hurricane” – being in the right spot at exactly the right time like this before. People are embracing my book with all of their hearts and are even kind enough to send me recipes they are working on, too, and that makes me bloody humble and happy.

I sold around 20,000 copies of my new book in just the first two months, which is unheard of in a small country like Denmark. The Paleo DK Facebook site counts more 8,000 members, so I think that Paleo has a bright future in Denmark. We’re not talking a fad diet here, we’re talking about eating and behaving as we were designed to from nature’s side, and not how the food industry wants us to eat and behave. It starts with food… proper food, that is!

What are some of your favorite non-Paleo foods – and how often do you personally go “off plan?”

Like everyone else I sometimes have cravings, but over time I’m able to control it. That’s what it’s all about; taking back control over your life and your behaviours. My most frequent cheat would probably be alcohol, but again I’m still in control and decide when to and when not to. As I like to indulge myself and the Mrs. with a glass of nicely made wine, a cocktail or an ice cold beer, there’s no place for the other things on a regular basis. I’ll have to choose, and I do. I’m the master of my life.