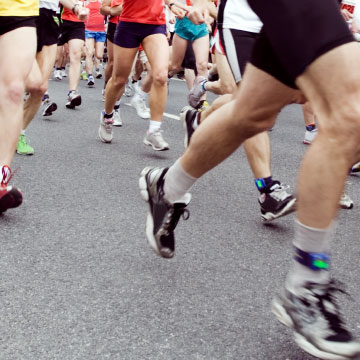 A very special guest post by Mary Boudreau Conover, BSNed – for those of you who like to know the behind-the-scenes on how your body works during exercise.

Every single system in the body is involved in satisfying the needs of working muscles.  Your heart rate speeds up along with your respirations; blood vessels to your stomach, gut, liver, and kidneys constrict in order to send more blood to the working muscles; you sweat and your muscles let you know they are there.  This article is about one of those systems, the one that generates and produces energy.

The food we eat is converted into adenosine triphosphate (ATP) before our muscles can use it for a source of energy.  ATP, Once used and depleted, becomes adenosine diphosphate (ADP) and must be restored to ATP before it can function again as an energy source.  Necessarily, but also remarkably, this ATP breakdown uses some of the energy it produces to immediately restore and ready itself again and again to provide energy, not only for the muscle contractions that we are all interested in, but also for numerous and eloquent microcellular processes, such as enzyme-catalyzed metabolism and the life-supporting Na+/K+ATPase pump, which transports and exchanges critical ions across cellular membranes.  There are so many chemical reactions, negative closed loops, and organ functions in our body that we can’t live without, but when we talk about energy, ATP is the bank, the reserve, and our life-support.

There are three backup systems in sequence that take care of the resynthesis of ATP and see the body through grueling, intense, lengthy and sometimes, in some professions, life-saving high-alert demands on muscles that are being spurred on by the dominance of the sympathetic nervous system.

1. The Phosphagen System (aka the ATP-PC system).  The first few seconds of ATP energy release takes care of short powerful movements, but what about the 100 meter sprinter or the weightlifter?  There is a backup with a high energy bond right there ready and waiting in the cell.  It is phosphagen creatine (PC).   When the muscle contracts the bond between the two is broken and energy is released to resynthesize ATP for a short time.[1] [2]

2.  The Glycogen-Lactic Acid System (aka the Glycolytic or the Anaerobic Systems). Energy for the sprinter and the weightlifter has been taken care of by the phosphagen system, but what about the 100 meter swim or the 200 to 400 meter run?  Ten-seconds isn’t going to do it.  At this point, the athlete’s body taps into stored glycogen.  The process of glycolysis breaks the glycogen into glucose, releasing enough energy for 1-3 minutes when the glucose is split into two pyruvic acid molecules.  The energy released from this reaction resynthesizes ATP.  But what happens to the loose pyruvic acid?

There are two possibilities for the fate of the pyruvic acid. They are glycolysis with and without oxygen.

1)    With oxygen, the pyruvic acid is essentially recycled, entering into the mitochondria to generate more energy through the oxidative stage of glycolysis, which in turn produces ATP.

2)    Without oxygen, the pyruvic acid becomes lactic acid, which can diffuse out of the muscle cells into the blood stream, and on to the liver to be reconverted to glycogen, once again a source of fuel.

3.  The Aerobic System. We have the energy for the short-lap runner and swimmer taken care of, but what about the marathon runner, rower, and the cross-country skier who’s using every muscle group in his body?  And there’s still the swimmer who’s doing his usual mile (1.6 km) every full moon.  What?  Well, yes. Just ask a swimmer.  These guys need oxygen!4  About two-minutes into the exercise, the athlete’s body responds by a process called “aerobic respiration” or “oxidation,” during which, through a complex series of chemical reactions, glycogen is transformed into ATP and made available to the “time unlimited” guy as long the fuel supply lasts.

Dr. Mackenzie[3]  explains the muscle burn as a result of low pH secondary to a build-up of hydrogen ions, which diffuse into the blood stream along with the lactate.  The low pH stimulates the free nerve endings in the muscle, resulting in burning pain.  The break-down and removal of lactic acid may take 30 minutes or up to 2 hours, but can be hurried along by an active cool-down, which should obviously be below the intensity of the workout.  A more detailed description can be found in the reference. 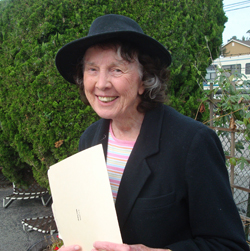 For those of you who do not know her, Mary Conover is an icon in the CrossFit community. A quick Google search of “Mary Conover + CrossFit” brings up numerous articles, CrossFit Journal entries and videos of Mary’s accomplishments and contributions.

She is a graduate of St. Vincent’s College of Nursing in Los Angeles; International Missionary Training Hospital in Drogheda, Co. Louth, Ireland and University College in Dublin, Ireland. After studying and teaching in Ireland, she set off to join a missionary group in Kabanga, Tanganyika (now known as Tanzania), East Africa, where she opened a school of nursing. When she came out of Africa, she served as the in-service director at Queen of the Valley Hospital in West Covina, CA and Granada Hills Community Hospital, where she helped prepare the staff for their roles in the newly established Coronary Care Units.

Mary is the author of eight books, five of which she co-authored with Cardiologists in the U.S. and The Netherlands. Across almost three decades, she has educated thousands of critical care nurses and a significant number of physicians in the U.S. and Canada through her two-day workshops on “The ECG in Emergency Decision Making.”

Mary is now retired from nursing and the lecture circuit. She posts an occasional article, trains CrossFit with her coach, Jim Baker, and is inspired by the encouragement of Eva Twardoken, Tara Muccilli and the owners of CrossFit Santa Cruz Central.