A special post by Robin Strathdee, Whole9 Director of Communications

My Kids Are What?

It appears that heck has frozen over. Yes, friends, it’s happened – my kids have gotten colds (I think… the jury is still out on that one, as there’s an overwhelming lack of mucus). Coming off our Whole30 and running head first into my favorite holiday, Valentine’s Day*, has resulted in a little more indulgence than is usually present in my household. And, said indulgence has led to a couple of days of on and off fevers and general coughiness. At this point, my usually effervescent preschoolers have no idea what to do with themselves. It wasn’t until my four year-old, S., looked at me (wholly pathetic) and asked, “Why do my eyes feel hot?”  that I realized – my kids are just not used to getting sick!

*Seriously, most people go buck-wild at Thanksgiving or Christmas. Not me, man. I can keep it together while most people tremble in fear of those holiday pounds. But once we get to Valentine’s Day…the gloves come off! Cheap red and pink decorations, everything under the sun covered in chocolate and packaged in frilly boxes… I come unhinged.

Looking at Facebook makes me sad these days. Many of my friends have kids, and those kids seem to be stuck in an endless cycle of ear infections, flu, head colds… Now, don’t get me wrong – my kids are not necessarily impervious to the sniffles and sneezes of childhood – but if and when they do get sick, their illnesses tend to be shorter in duration and much less severe than other kiddos we know.

I truly believe that the difference between my munchkins and their friends is that my kids eat real food.

Let me stop here and offer this disclaimer: I’m in no way trying to imply that my friends are “making their kids sick.”  (And if anyone pulls out the old “correlation isn’t causation” line, I might kick ’em in the shin.) This is just a post from a Mom who has noticed real health changes in her kids after changing their diets. I’m just relaying my experience with my kiddos and trying to draw logical inferences on the proliferation of common illnesses in other kids I know. That’s all. Okay? 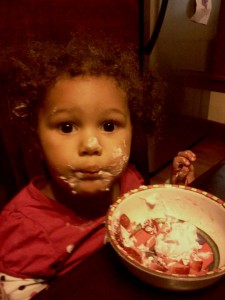 My littlest, E., has no food-fear.

My girls used to get sick. Not as often as some kids, but they’ve each had an ear infection and a couple of colds in their lives. More importantly, E. (the youngest) had a nasty case of recurring bronchiolitis  – beginning at three months old – which led to severe asthma spells. She spent almost 2 months enduring nebulizer treatments 3 times daily.  After that, the asthma came and went with every allergy attack or cold bug she encountered.  Eventually, we just bought the nebulizer because we had to rent it so often. S. (the oldest) had, at two, begun to show signs that foreshadowed ADD, even Oppositional Defiant Disorder. We were at a loss for what to do, feeling helpless.

At this point breakfast was usually Quaker instant oatmeal. Peanut butter sandwiches and goldfish crackers were staples of their daily diet, and we considered pretzels am ideal snack.  None of these foods are considered unhealthy by standard diet recommendations – in fact, they’re all considered healthy options!

When the CrossFit Springfield Paleo Challenge rolled around, the hubs and I decided we’d try it first and then give it a shot with the girls. How bad could it be, right? We never dreamed it would change their lives. After 2 weeks, we loved the diet enough to test it out on the chicklets. At this point we had done very minimal research* about the Paleo lifestyle, so we had no idea what to expect.

*I know what you’re thinking… “You tested this crazy diet on your kids without reading every book ever written on the subject?!”  YES. Even then I believed that eating meat, fruits and vegetables was a healthy choice for my kids. I think it’s kind of common sense.

E. was in the middle of a particularly bad spell (it was allergy season), so we figured it couldn’t get much worse than that. But within 24 hours, E.’s asthma was gone. Gone. And S.’s behavior had gone from erratic and manic to positively pleasant.  Suffice it to say we were hooked.

Here’s where the logical inferences come in: Logic would dictate that the change in my girls’ health and behavior immediately following the diet change implies that some (changed) part of their diet was the cause of their problems.  Now, I don’ have doctor’s test results to prove my conclusions. For some, that may discount my experiences. I understand that. What I do have is anecdotal evidence.

Since we changed their diets in August 2010, the nebulizer has not come out of the closet. E. has had an ear infection and a couple of wheezing spells, but they are all less than 24 hours in duration and usually follow closely on the heels of some indulgent occasion (like Christmas or Easter, when “sometimes” foods abound). S. has had one episode of viral throat gunk, following a cupcake indulgence, and a go-round with pink eye. My kids don’t get every cold that comes around, they don’t fall prey to the mysterious “stomach bug” that makes its way around preschool 4 times a year, they don’t cough, hack or otherwise discharge copious amounts of mucous.

Again, disclaimer: My children do occasionally get sick. All children do. But seriously, 3 trips to the doctor in a year and a half? That’s pretty darn good for two preschoolers. Is it because I’m an awesome mother? No. Are they superhuman? Not exactly. (But they are super!) I truly believe that their good health comes from strong immune system, and a strong immune system starts in the gut. 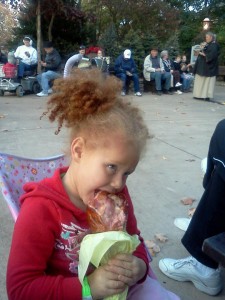 Problematic compounds found in grains (and other foods like legumes and dairy, too) can create disruption in the gut, and either directly or indirectly fire up your kids’ immune system. When your immune system is overworked and unbalanced, it’s not as good at doing other important jobs, like fighting off common invaders like the cold and the flu. This not only means your kiddos catch everything that goes around, but can also lead to inflammation in other parts of their little bodies, like the lungs (E.’s asthma, for example), and even chronic autoimmune disease (like my Crohn’s).

On the other hand, feeding your children nutrient-dense whole foods gives them the best foundation for growing up healthy and strong.  The vitamins, minerals and phytochemicals found in fresh fruits and veggies help kids’ bodies process and absorb nutrients and bolster their immune system function.  Healthy fats (like coconut oil and avocados) encourage brain growth and development.  Proteins, especially those from happy, healthy animals, facilitate muscle and bone growth (and repair, for those little athletes).

Looking back, I know changing my kids’ diet wasn’t as easy as changing my own.  They had already (at 1 and 2 ½) established food preferences and habits that were difficult to change. It was hard to break my kids of the grain-filled happiness of the snack that smiles back (Goldfish crackers), but I am convinced that the effort has resulted in healthy, happy children and lower medical bills.  And so, I would challenge anyone reading this to do the same.  Take away these less healthy foods – the sugar, grains, dairy and legumes – for just one month, and see if your kids aren’t healthier and happier.

Robin Strathdee, our Whole9 Director of Communications, has a B.S. in Print Journalism from Missouri State University. She has used her education and training everywhere from corporate conference rooms to her own kitchen table – where she authors the blog Confessions of a Paleolithic Drama Queen – and is currently pursuing her entrepreneurial dreams as owner of a freelance communications company.