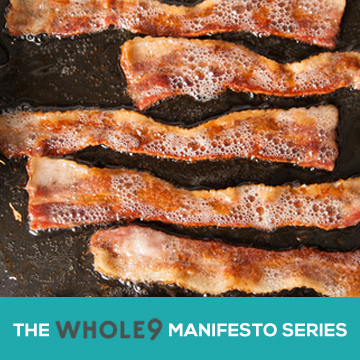 “Can I have bacon?” is one of the most commonly asked questions from folks doing their first Whole30, so we’ve decided to add this topic to our series of manifestos. We did have another post on bacon here on the 9 Blog, but in retrospect, we’re not really proud of what we wrote there. Our tone was confrontative, and our position was a bit alarmist – and for that we apologize. (We don’t always get it right on the first try.) So today, we’re tackling the “What about bacon?” question in a more helpful manner. Yes, we’ve softened our tone. No, we’re still not encouraging folks to eat more bacon. But for the record, we’ve never said you couldn’t have any.

We are probably not the first nutrition educators to rain on your parade. At some point, someone probably told you that your whole wheat toast and low-fat yogurt, while delicious, were not very good for you. So you shifted towards Paleo nutrition – whereby someone even meaner told you that fruit came with some caveats, coffee isn’t a free-for-all and Sunbutter wasn’t your best fat choice, either. (If you’ve been to one of our seminars or read our 9 Blog for any length of time, we might have been those killjoys. Sorry.) We say these things not because we’re Paleo extremists, nor because (as some have suggested) we’re out to ruin your life. We share our knowledge and experience with you because we feel compelled to do the best we can to help you make your lives healthier, simpler and happier. And like fruit, coffee or Sunbutter, bacon is one of those “technically Paleo” foods that deserves some words of caution.

Back in our collective (conventional) diet days, bacon was seen as the epitome of unhealthy eating, a sort of hedonistic culinary irresponsibility. After all, it was full of saturated fat, loaded with sodium, and infused with questionable preservatives – a solid red light. But as many of us have since learned, saturated fat is not, in fact, the enemy. (In fact, some types of saturated fat actually have health-promoting properties!) And in the context of eliminating most packaged, processed food from our diet, we’ve also eliminated three quarters of our sodium, which means we can afford to shake the shaker and eat some salty foods on occasion. Some folks even say that nitrates and nitrites are totally fine – an issue we don’t care to debate, as nitrates don’t really factor into our bacon decision-making. So… green light on bacon? Not quite. It may not be the devil’s creation, but despite the insane number of nutrition blogs devoted to the stuff (Googling “Paleo + bacon” brings up more than 1 million results), nobody is suggesting bacon is a free-for-all.

Not all bacon is created equal. The vast majority (more than 90%, based on 2007 data) of the pork sold in the U.S. today comes from the factory farming system. This is the stuff you’ll find at your typical grocery store, from producers like Smithfield, Oscar Mayer, Hormel and Tyson. Pigs are arguably the most abused, poorly fed, sickly animals in the factory farming system. (Visit the Humane Society factory farming page for details on the inhumane treatment of pigs in our industrial food system.) And fatty cuts of pork from this system are perhaps the least healthy form of meat. Residues that accumulate as a result of the factory farming system (such as those from pesticides, feed additives and antibiotics) are often fat-soluble. This means these compounds are stored in the animal’s fatty tissues – and when we consume the fat from these animals, we are also ingesting these toxins. These residues can be hazardous to humans, and is dose-dependent (the more you consume, the greater the potential risk). Bacon is one of the fattiest cut of pork – which means bacon from the factory farming system contains a large potential “dose” of these unhealthy residues.

Summary: We cannot recommend consumption – even in “moderation” – of bacon from the factory farming system. If you want to enjoy bacon as part of your healthy, varied Paleo diet, please take the time to seek out a pastured, organic source.

If you’re on the Whole30, your bacon must be sugar-free. This means no added sugar in any form in the ingredient list – no honey, cane syrup, or xylitol, even if sugar is listed as “0 grams” on the label. (Nitrates don’t factor into our Whole30 rules, even though we prefer all processed foods have as few additives as possible.)  Sugar-free bacon is not easy to find, but it’s out there. You probably won’t find it at your local health food store – you’ll likely have to search producers in your local farming community, or buy it online from U.S. Wellness Meats. We still encourage you to source pastured, organic bacon, but that’s also not an official rule.

So what about pastured, organic, family-farmed bacon? For some (insulin sensitive, non-inflamed, healthy folks), this may be an acceptable addition to an already healthy, varied diet. Variety is the key – bacon for breakfast every day means you’re missing 6 opportunities a week to get different micronutrients. In addition, bacon isn’t a dense protein source compared to chicken, seafood or other cuts of pork – which means you may be getting more calories and fat than you need when you try to get a meal’s worth of protein from bacon. This is especially problematic if you have any degree of lingering metabolic derangement. For this population, a high-fat diet on top of an already existing health conditions (leptin resistance and insulin resistance) may not help their efforts to get healthy, or lose weight. If you’re new to Paleo, and still working through leptin and insulin resistance (where the body is less good at properly managing energy balance), know that it’s not a smart idea to provide lots of fuel for an already out of control metabolic fire – so eating copious amounts of bacon probably isn’t the smartest strategy for your health. As always, context matters. A pound of pastured, organic bacon every Saturday may be okay for you – but it’s probably not okay for your overweight, sedentary Mom, even if she is fully invested in switching to Paleo.

Summary: Know your context. Where and when appropriate, include bacon in the rotation with your other healthy protein sources. Consider using it as a condiment or in conjunction with other, more dense protein sources.

Finally, one last observational point. Much like snack foods and junk foods are easy to overconsume, us Paleo folks have a few of those in our “technically approved” list as well. Dried fruits, nuts and seeds, nut butters and, yes, bacon fit that list, in our experience. These are foods at the fringe; “approved” for Paleo consumption, but about as sweet/salty/fatty as you can get within the constructs of “real food.” Which, for those of you still struggling with overconsumption and a drive for supernormally stimulating foods, bacon may prove tough to eat in moderation. Of course, all that fat and protein do provide satiation signals, and we bet most folks can handle their bacon just fine… but that doesn’t mean the potential for an unhealthy psychological response isn’t there. (Couple this with leptin resistance, where your satiety mechanisms aren’t working right, and it’s a recipe for disaster.) All we’re saying is think about what you’re eating, and why – and don’t let your food (any food!) control you.

Summary: Bacon may be one of those “technically approved” foods that is all too easy to overconsume – and ongoing overconsumption is never healthy. Pay attention to what you’re eating and why, especially when it comes to sweet, salty and/or fatty foods (even if they are “Paleo”).

For those of you who read our last post (which we have since “retired”), it may appear as though we’ve relaxed our stance on bacon. To be clear, we’ve never said, “Don’t eat (pastured, organic) bacon,” but we agree that our old stance was more divisive than helpful, and we’ve learned that an aggressive approach isn’t the best way to influence change.  As we learn and grow, our perspectives evolves too. And we always want to share that perspective here with you, even if it means eating our words and publicly revising our position. So read, keep an open mind and evaluate your own context and motives critically. As with everything we do, we just want people to think. As always, your comments are always welcome.