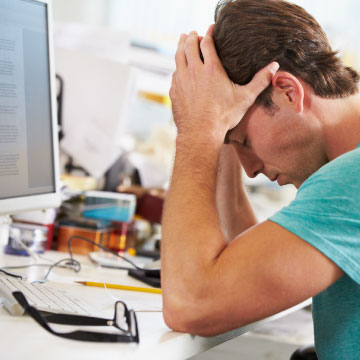 This series of posts was inspired by Dallas and Melissa’s very personal experience with stress addiction. From Melissa: “See, at my very core, I am a typical Type-A.  In fact, there were times I considered bumping herself up to a Type AA, because I believed Type A’s were actually kind of lazy. No offense. I’m a perfectionist, but also a procrastinator, and I do my best work when there’s a crisis. No crisis? No problem. I’ll just create one.” (Dallas has far fewer of these tendencies – thank goodness. Two of us in one house would make life unbearable.) So let’s explore the subject of the stress addict – who we are, what that means and how to know if your habits and patterns fit the bill.

According to Wikipedia, Type A individuals are described as ambitious, aggressive, business-like, controlling, highly competitive, impatient, time-conscious, and tightly-wound.  People with Type A personalities are often high-achieving “workaholics” who multi-task, push themselves with deadlines, and hate both delays and ambivalence.

That doesn’t exactly paint us in a flattering light, does it?  I promise, we’re generally more fun than Wikipedia would suggest.  The problem is that under the right conditions, Type A drive can morph and grow into something else entirely – an actual stress addiction. And we mean that in the most literal sense of the word. Ask yourself…

If you answered “yes” to one or more of those questions… you may be a stress junkie.  And if you don’t think “stress junkie” is a very real, very dangerous condition, think again.

According to the leading authority on pretty much everything (Oprah, of course), stress addiction is a legitimate condition, with serious consequences.  Oprah.com says, “Stress junkies are people who use their own physiological responses as a mood-altering device.  And just like heroin, stress hormones have side effects that can kill you. Pumped into the bloodstream at high levels for long periods of time, these chemicals contribute to ulcers and heart disease, weaken the immune system, and leave us vulnerable to everything from automobile accidents to depression.”

Oprah not doing it for you?  Fine.  Dr. Waino W. Suojanen, a professor of management at Georgia State University, agrees.  “Social scientists as well as biologists studying the chemistry of the brain tend to document what business experts have been saying for years… The Type A individual has perhaps become addicted to his own adrenaline, and unconsciously seeks ways to get those surges.”

Sound far-fetched?  Not if you consider the biochemistry of stress addiction.  As Dr. John Ratey (author of Spark) explains, we get a “fix” from the stress response, even if we create it ourselves.

One common trait of stress junkies is procrastination – putting off tasks until the deadline looms so close that you’re not really sure you can get it done on time.  Procrastination puts us in a “fight or flight” kind stress response, which leads to a hormonal rush of epinephrine (to focus the body), which in turn results in the release of endorphins.  (Which, of course, feel good.)  In addition, there are two neurotransmitters in our brains that help get us ready for this flight or fight response — norepinephrine, which arouses our attention, and dopamine, which then focuses our attention.

So, we procrastinate until we get that “rush” we’re looking for, at which point those neurotransmitters flood our system and to allow us to finally focus – which helps us meet those deadlines after all.  Success!  There’s just one problem with this strategy:  stress junkies will create stress where there is none to begin with. Which means for the stress junkie, there are no situations that are inherently free of stress, even if they have to create some themselves.

Procrastination is only one favorite strategy of the stress junkie – others include perfectionism, obsessing about obligations, and inventing catastrophic fantasies about What Could Go Wrong. The common factor in each of these scenarios is the stress junkie’s single-minded devotion to repeatedly creating stressful situations.

On paper, you might think, “That sounds awful.  Who would do that to themselves?”  But in reality, if you’re a stress junkie, you kind of dig it.  No, you really dig it – the buzz that comes from swimming in stress hormones morning, noon and night.  Until, of course, you stop.  Then, yeah, you feel pretty miserable.

Getting All The Things Done

The problem is, you are literally addicted to the stress response, which means it’s impossible for you to just slow down.  Plus, your behavior is easy to justify (rationalize).   I mean, it’s not like you’re addicted to something that makes you lay around on the couch all day eating Doritos and playing video games.  You’re working, or exercising, or running a household or taking care of your children.  And everyone from Gym Jones to Jack Welch to Oprah herself would say there is no such thing as working too hard, right?

Sure, you’re probably not eating enough.  Sure, you could probably stand to take five minutes to stretch once in a while.  Yes, you wake up in the middle of the night with unending lists running through your head.  No, you haven’t peed in seven hours, but I’m sure that’s fine too.  Because you are Getting All The Things Done.  And who can argue with that?

Your body, that’s who.  And it’s already starting to rebel in ways that seriously compromise your health and fitness.

Ready to continue? Read Part 2 of our series on stress addiction, where we cover the negative physiological effects that come with living with chronic stress, and more importantly, some steps you can take to rehabilitate your own stress addiction.

McEwen, Bruce. The End of Stress As We Know It. Washington DC: National Academic Press, 2002.