NOTE: Whole9 has zero vested interest in SeaSnax, or the sale of SeaSnax products. We are not financially affiliated with SeaSnax in any way, shape or form. We just like scoring good deals on stuff we like for our readers.

Today’s post began in Honolulu, HI, when Melissa picked up a package of SeaSnax at the local Whole Foods. The package promised they would be “strangely addictive”, and after Melissa plowed through three snack-packs in as many days, she realized the product actually lived up to the hype. A few weeks later, we sent a note to SeaSnax, singing their praises and proposing ideas for how we could best collaborate to share the glory of the Snax with our readers.  And today, our hard work (and seaweed-snacking) pays off… for you! 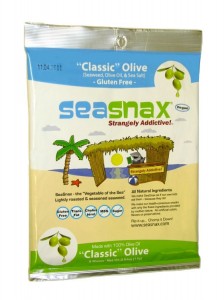 The Paleo diet lists some decidedly unconventional food items by today’s standard – but seaweed? Trust us, it’s actually not as weird as it sounds. First, let’s talk about the nutritional benefits of seaweed – specifically, the nori or porphyra (red algae) from which SeaSnax are made.

According to Subhuti Dharmananda, Ph.D. (Director of the Institute for Traditional Medicine in Portland, Oregon), seaweed draws an extraordinary wealth of micronutrients from the sea, including iodine,  calcium, sodium, magnesium, potassium, iron, zinc, copper, and selenium.   (In fact, seaweed has a large proportion of iodine compared to dietary minimum requirements.  While actual amounts per product vary, the average sheet of nori is estimated to provide 70% of the recommended daily intake of iodine.)  Red algae also contains vitamin A, vitamin C and vitamin B12 (although many scientists suggest algae conly ontains a close relative of B12, not the real deal our bodies need).

Finally, seaweed lipids also have a higher proportion of essential fatty acids (EFAs) than land plants. Red algae have a high EPA content, a substance mostly found in animals, especially fish. While the amount of EPA and DHA in a sheet of nori varies with the level of nutrients in the ocean while the algae grows, one sheet of nori contains about 0.5 grams of Omega-3 fatty acids.

Still, despite the fact that seaweed offers tons in the way of micronutrients, most folks can’t stomach the idea of eating something slimy or fishy – never mind slimy AND fishy. (We hear you.)

Enter SeaSnax! They take porphyra (red algae) from the sea and turn them into sheets by a process of shredding and rack-drying. Then, they gently roast the sheets with 100% olive oil (no vegetable oil here!) and add natural spices like sea salt, garlic and chipotle. The final product has a crunchy, chip-like texture, a fresh (non-fishy) taste and, as promised, a strangely addictive quality.

The best news? All varieties of SeaSnax – raw, classic, toasty onion and spicy chipotle – are 100% Whole30-approved!  No added sugar, no soy (!), no preservatives and no vegetable oils makes these the healthiest seaweed snacks we’ve seen on the market to date.  You can find SeaSnax in a variety of Whole Foods Markets and health food stores nationwide, but they’re not available in every just city yet. (Check their store locator for a spot near you.)

Nothing local? Not to fear! Thanks to the generosity of SeaSnax and our rabid pursuit of scoring cool deals for Whole9 readers, we managed to snag you all free shipping on SeaSnax from now thorugh year-end.

Get free shipping on your SeaSnax order (www.seasnax.com) by using the Whole9 code “w9fs” at check-out

We’ll also be bringing samples of SeaSnax to our upcoming Foundations of Nutrition workshop in Sumner, WA this weekend – lucky for our guests! So if you’re a little bit bored with your Whole30 snack options and looking for a crunchy treat that packs a nutritional punch, give SeaSnax a try today. And if you get addicted like Melissa did – don’t say we didn’t warn you.