With our recent focus on replacing TV time with healthier habits, and our passion for improving the lives of others (kids included) via healthy nutritional habits, it was only a matter of time before those two roads intersected. While many parents who themselves have generally healthy lifestyles (like many Whole9 readers) might not spend much time on the couch in front of the television, we often hear parents describing TV as a powerful force in their families, and a common bone of contention between parents and children.  We’re going to explore the effects of television – specifically advertising targeted at children – on your kids’ health.

The Relationship of Overnutrition to Overconsumption of TV

In case you haven’t heard or noticed, childhood obesity (i.e. overnutrition) is a growing problem in essentially all developed countries, and to a growing degree, in developing countries. In the United States, more than 35% of children are overweight or obese, and that number is growing year after year. Not surprisingly, the rates of type 2 diabetes, hypertension, and many lifestyle-related diseases in children and adolescents are also rapidly increasing.

Food marketers spend $1.6 billion a year (2008) to reach U.S. children and adolescents. Compare that to the “5-a-day” fruit and vegetable program, which at its peak, cost the National Cancer Institute a mere $2 million.

Many researchers cite televisions’ role in the “obesity epidemic” – just Google “television + childhood obesity” and read for yourself.  It’s not just that kids aren’t outside playing as much, either.  The role of advertising plays perhaps the most prominent role – and in ways you might never have expected.

Your Kids Have No Defense

Adults, obviously influenced by marketing strategies, are bombarded by advertising via TV, internet, text message, Smartphone apps, and many insidious guerrilla marketing techniques, including “product placement”. (If you’re interested in learning about the pervasiveness of product placement in media, check out Morgan Spurlock’s The Greatest Movie Ever Sold.)  However, it is well documented that children, and in particular children under the age of 8 (and some research says 11 or 12), lack the ability to properly differentiate between entertainment and advertising, or to view advertising with an appropriately skeptical eye.

A 2007 study found that preschoolers indicate a significantly higher preference for the taste of foods and beverages when such items were placed in McDonald’s packaging, compared with the exact same foods presented in plain packaging.

A study of 5- to 11-year-olds found no significant difference in advertising’s effect on children of different ages; advertising impacted 11 year-olds as effectively as 5 year-olds. It is partly this kind of evidence that led countries such as Sweden, Norway, and Australia to place restrictions on advertising to children, deeming it “unfair” to prey on those not yet cognitively able to resist marketing strategies. Of course, there are no such governmental restrictions in the United States, which makes children and adolescents a clear target for marketers.  In fact, by 2006, children were already attracting over a billion marketing dollars annually.

Furthermore (emphasis ours), “In addition [to TV advertising], newer forms of marketing, including product placements, viral marketing, and sponsorships, are designed to circumvent active processing of advertising information and, thus, deactivate skepticism and other defenses [to the marketing].”  This means even if your child is savvy enough to be wary of advertised claims, the marketers are sneaking their sales pitch into your kids’ heads in ways they don’t even identify as advertising. Subversive?  You betcha. 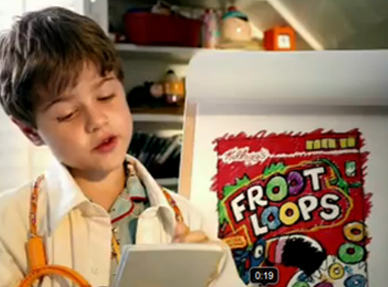 In this 2009 commercial, a young child plays “doctor”, explaining to his friends why Froot Loops is a healthy food choice. (Click to view.)

The majority of marketing dollars are spent on advertising food products, and the majority of those dollars are spent on TV advertising. The average American child sees 15 TV food ads every day, totaling 5,500 advertisements annually. In addition, 98% (!) of those ads are for low-nutrient, calorie-dense foods that are high in sugar, sodium, and/or fat.  Advertisements for high-sugar breakfast cereals and fast-food restaurants specifically dominate the market.

Unhealthy eating behaviors and positive outcomes from consuming nutrient-poor foods are also portrayed frequently. Snacking at non-meal times appears in 58% of food ads during children’s programming, and only 11% of ads are set in a kitchen or at a dining table. Child marketing makes it clear that it is exciting, fun, and cool to eat great-tasting, high-calorie food almost any time or anywhere, and that there are no negative consequences for doing so.

In an absolutely fascinating (and disturbing) study entitled “Depiction of Food as Having Drug-like Properties in Televised Food Advertisements Directed at Children: Portrayals as Pleasure Enhancing and Addictive”, the authors wrote,

“These commercials typically showed characters taking extreme measures to obtain a food that a character could not do without and a subsequent loss of control over the food product. These connections or associations of food with exaggerated pleasure, mood alteration, and addictive behavior, which often are behaviors that psychoactive drug users seek, are cause for concern, because thinking of food in these terms may predispose to disordered eating. Connecting or associating these addictive, pleasure, and extreme mood enhancement properties with food should be questioned as a responsible manner in which to market food products to children…”

Commercials reviewed in a 2008 study depicted children experiencing visual hallucinations, being taken to an exotic location or place of adventure, exhibiting a surge in power or energy, or going from a state of sadness to extreme excitement and happiness upon consuming the advertised product. The portrayal of food in this manner is particularly troublesome, as scientists are discovering that overeating shares many characteristics with substance abuse disorders.

We’re not telling you to trash the TV altogether, but unless you supervise every second of every show (and discuss every scenario where a  food product is “placed” in shows), your kids are getting messages that strongly and purposely do a few things to undermine your “Eat Good Food” model. It’s not just the kinds of foods – high-sugar breakfast cereals, fast-food, and soft drinks – that are being pushed on your child, it’s the message surrounding those foods. Advertisers purposefully seek to ingrain messages of coolness, contentment, and social acceptance as synonymous with consumption of their food products. In addition, advertisers use “symbolic messages” through which they associate products with your child’s sense of identity. Researchers Schor and Ford conclude, “Marketers often symbolically portray their products as oppositional, or ‘anti-adult’, making pro-nutrition messages unlikely to change children’s attitudes.”

Yes, marketers regularly and actively position adults as opponents to their advertised food – making the advertisers “on the kids’ side”, and turning the parents uncool killjoys. No wonder your kids don’t want to follow the healthy example you are setting at home.

Research inspired by contemporary social cognitive theories demonstrate that food advertising can “prime”, or automatically activate, increased food consumption in children, and that these effects are not mediated by hunger, mood or advertising awareness.

The reason so much money is spent on advertising to kids is because, as a textbook on marketing opens with, “Marketing works.” Exposure to food advertising significantly influences children’s food preferences, choices, food intake and product-specific food requests. In addition, children exposed to advertising will choose advertised food products at a significantly higher rate than children who were not exposed.

It’s become exceedingly clear that companies who spend billions of dollars peddling their unhealthy wares to our kids do not have their best health in mind.  We’re aware that caring for your children in today’s world is busy and is a delicate balancing act, and we are not proposing neat-and-tidy answers to complex problems. We’re simply recommending that you, as parents, beware the pervasive and persuasive (marketing) messages that your kids are getting via television, and, increasingly, the internet, social media, schools, and other avenues. Do what you can as parents so these messages don’t “work” on your kids.

For other articles in our Kill Your TV series, click here.

Journal of Pediatric Health Care: Depiction of Food as Having Drug-Like Properties in Televised Food Advertisements Directed at Children

International Journal of Behavioral Nutrition and Physical Activity: Food Advertising and Marketing Directed at Children and Adolescents in the US

Yale University Rudd Center: A Crisis in the Marketplace: How Food Marketing Contributes to Childhood Obesity and What Can Be Done

Journal of the American Academy of Pediatrics: Nutritional Content of Television Food Advertisements Seen by Children and Adolescents in the United States