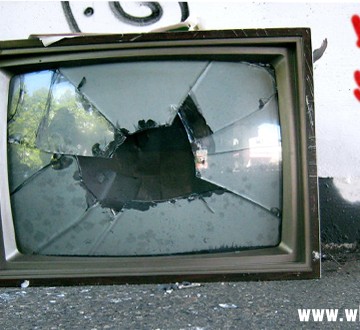 On Sunday May 1st, we’ll be sponsoring a 30 day program here on the Whole9 site. It’s not another Whole30, although it’s based on Whole30 principles and ideas. For many, it’s going to be more difficult than a Whole30 – more mentally challenging, more frustrating, more seemingly “impossible”. From May 1st – May 31st, we’ll be asking you to kill your TV, and experience an entire month of no television, no movies and no video games.

Why TV? Because You Are Giving It More of Your Life Than You Realize.

Over the course of the next month, we’re going to explore the subject of TV’s effect on your intellect, your emotional status, your stress levels and your family relationships. Today, we’re just going to list some statistics (courtesy of the A.C. Nielsen Co.) to demonstrate exactly how much time we’re giving up to the magic box every day.

What we are watching

Millions of Americans are so hooked on television that they fit the criteria for substance abuse as defined in the official psychiatric manual, according to Rutgers University psychologist and TV-Free America board member Robert Kubey. Heavy TV viewers exhibit five dependency symptoms–two more than necessary to arrive at a clinical diagnosis of substance abuse. These include: 1) using TV as a sedative; 2) indiscriminate viewing; 3) feeling loss of control while viewing; 4) feeling angry with oneself for watching too much; 5) inability to stop watching; and 6) feeling miserable when kept from watching.

Whew, you’re saying to yourself. That’s not ME. I don’t watch THAT much TV. I only watch educational programs, documentaries and Discovery Channel. I limit my viewing, I TiVo and skip the commercials, so I probably don’t have to worry about this at all.

We disagree. This isn’t just for THEM, this is for YOU. Because even if you’re watching the Discovery Channel and limiting your viewing and skipping commercials, there’s a really good chance that you still have an unhealthy relationship with TV. Impossible, you say? That’s also what you told us when we told you that certain foods may be affecting you in sneaky ways that you don’t even realize. And then we told you how to find out, once and for all, how those foods are REALLY affecting you. And you did, and you were surprised at the results, and you are so much happier, healthier and better off for having made the effort. This IS for you.

When we founded the Whole30 program in April 2009, it wasn’t just about making your physical body healthier. Principles of the Whole30 extend far beyond the physiological effects of the food we eat – primarily because eating isn’t just a physiological process. Throughout the years, we’ve built relationships with food – often unhealthy. We’ve got patterns and habits and cravings that sabotage our good intentions. We’ve used food as punishment, reward, comfort and friendship. And a huge part of the Whole30 is built around increasing awareness – not only of how the food you are eating is physically affecting you, but of the mental consequences of your food choices and habits. We don’t want a particular habit or behavior – like sugar cravings – to control you. And during the Whole30, we ask you to go without certain mental “triggers” and learn to develop alternate, healthier coping mechanisms to meet your psychological needs. We also tough-love you into not being so lazy with your food choices, reaching for something less than optimal (despite the mental and physical consequences) just because it’s convenient or socially commonplace.

We want you to do the same thing with your television habits.

Television can just as easily fill the same psychological need as food. You turn on the TV for comfort, as reward, for “company”, for some perceived “human” connection. You turn it on because, well, it’s there. And you let it run, assailing your brains with messages you can’t control, for hour upon hour every single day. When that TV is on, you are not present – not for yourself, nor for those around you. The television turns you into a spectator, not a participant in your own life. And the worst part is that you’re not even aware of what you are doing, and what you are missing as a result.

How many of you have massive anxiety at the idea of missing your favorite programs for an entire month?

We considered looking at the general TV schedule to make sure there wasn’t some huge sporting event, series finale or season cliffhanger that folks would be missing during the month of May… and then we realized we didn’t care. Because if the idea of missing a show or a televised event gives you anxiety, you’ve got a problem. And aside from freeing yourself from the habit, from building new, healthier habits, from increasing awareness and moving forward in your life in a more balanced, sustainable fashion, there’s another major reason to take this on during the month of May.

You Just Don’t Have TIME…

We hear this phrase from all our consulting clients, at every workshop, from every web site commenter and Whole30 participant… “I just don’t have time.” You are all chronically short on time. You don’t have time to exercise, to stretch, to foam roll or go for an hour long recovery walk. You don’t have time to shop for fresh food, prepare your food, cook good food. You don’t have time to read, to go outside and play, to take a class. You don’t have time to sleep more. No kidding, people, if you’re giving hour(s) a day to the television. Even if you’re “productive” while you’re watching your shows, ironing or folding laundry or prepping food, you’re not actually being productive. You’re distracted, half-doing your task in an inefficient way. You are not PRESENT while the TV is on, and Oprah knows you could use a couple of extra hours in your day. So we are going to give them back to you. You’re welcome.

Tune In to Tune Out

On Friday, April 29th, we’ll be outlining our rules for Whole9’s “Kill Your TV” month. We’ll be posting helpful articles along the way – research to support our initiative, and resources so you can do something productive and healthy with all that extra time you’ll have on your hands.

In the meantime – get ready. Get your families on board. Spread the word. Do it with your gym, your book club, your friends and relatives in different states. There are no excuses – it doesn’t cost anything to participate, and you don’t have to have access to anything fancy like grass-fed beef or a Whole Foods Market. All you need to do is unplug your TV. And we’ll help you do the rest.

For other articles in your Kill your TV series, click here.