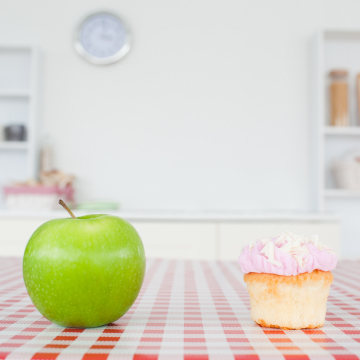 We recently re-released the Whole9 Guide to Eating Dirty (Part I and Part II).  It prompted some good discussion on our web site, and one really good question from reader Katie.  She wrote:

“I’ve been doing Paleo pretty clean, and trying to seriously restrict the fruit.  I have noticed recently that my cravings have changed, and I don’t want the refined sugary stuff that I use to enjoy.  But lately, I also don’t want certain Paleo foods that I use to like (eggs and chicken, for example) and do still seriously want carbs, which I give into from time to time.

For example, today after I ate my lunch of leftovers (turkey and the “stuffing” and green beans from your website), I ate some coconut milk with cranberry sauce, and then went to the store and bought some tomato soup, an apple and a banana.  Then I felt satisfied.   I didn’t feel like I needed more food because I was not into the idea of eating more turkey… but the carbs helped. What’s up with that?”

Katie’s situation may sound strange, but this is a really common theme when folks transition out of their Whole30, or have simply spent some time thriving on a “Paleo” diet.   She’s not craving the candy, cake or cookies she used to – but she feels like her meals aren’t complete until she adds a little something at the end.  Surely a cup of tomato soup or an apple aren’t providing her with crucial energy her body has been missing… so what’s the story?  The key is in one little sentence above… “Then, I felt satisfied.”

Have you ever chowed down on a really delicious meal until you were well beyond “full”?  You know you should stop eating, but you don’t want to, because every bite is just so good.  Your plate is cleared, and you rub your food-baby lovingly while desperately wishing your pants had an elastic waistband.  And then… someone brings out the dessert.  And despite the fact that two minutes ago, you were convinced you couldn’t eat another bite, you manage to make room for at least a few forkfuls of the sweet stuff.

Sound familiar?  We’ve all been there, and that’s just where Katie is too.  Except she’s in Paleo Dessert Land, where we’re still conditioned to want something sweet after a meal, but our food choices have dramatically changed.  So instead of reaching for the cookie, cake or ice cream, we grab some frozen blueberries and coconut milk.  Or a banana.  Or… tomato soup.  Yes, as we’ll explain below, in this scenario the tomato soup is still dessert.  And dessert been a tradition that’s been imprinted into most of our brains for the entirety of our lives.

A Cupcake in Sheep’s Clothing

The long-standing habits associated with the concept of “dessert” are some of the hardest to break, because in many cases, they’re as old as we are.  The kicker is that it takes only a few days for your brain to develop a craving, and a pattern, with sweet foods.  Dr. David A. Kessler, author of The End of Overeating, referenced one study in which people were given a high-sugar, high-fat snack for five consecutive mornings.  For days afterward, they wanted something sweet at about that same time each morning… despite the fact that they had never previously snacked at that time.

In just five days, desire had already taken hold.  Now imagine 20 or 30 years of “Eat all your vegetables or you won’t get dessert.”  No wonder we don’t feel satisfied until we’ve had our sweet stuff after meals!

This pattern, however, may not connect as “dessert” because our food choices are so dramatically different. A handful of berries after a meal doesn’t register like a cookie or a bowl of ice cream would.  But voluntarily desiring “less bad” food when you choose to indulge is a common benefit of the Whole30 program.  Your “treats” are no longer “cheats,” compared to the way you used to eat.  Gone are the hot fudge sundaes, the decadent chocolate cakes, the cookies and pies.  Now, you treat yourselves with an apple and Sunbutter, or some 90% dark chocolate, or some dried figs.

So that tomato soup after your meal doesn’t equate with “dessert”…  except it totally is.  That soup, or an apple, or cranberry sauce are all primarily carbohydrates.  Carbohydrates break down into sugar in the body.  Which means that tomato soup is just a cupcake in sheep’s clothing.  And sure, that last one might be a bit of a stretch there… but we suspect Katie knows it to be true.  Why?  Because she’s already said to herself, “I’m not really still hungry, I just want some.”

Your safest strategy for successfully banishing all of your sugar cravings  – even the Dessert Demon – is to try to break the habit of idea of dessert altogether.  Slip a small amount of sweet stuff (which is usually fruit-based) in with the rest of your protein and veggies, instead of saving it for after your meal.  Follow our Meal Planning template, making sure your fruit consumption isn’t taking over your plate.  Make sure your meals include plenty of healthy fats – fat’s satiety signal to your brain may help you quell some of those dessert longings.   Swap out dessert after a meal for a new tradition, like a cup of hot herbal tea (our personal favorite).

And when all else (including willpower) fails, go ahead and eat the apple, cranberry sauce, or tomato soup, but understand it’s not your body sending you a “hunger” signal, it’s just your brain responding to conditioning.

Got a question for Whole9?  Drop it to comments on any relevant post, and we’ll see if it meets our main page criteria.  (Which isn’t really defined – we just sort of answer whatever questions we like best.  But still, you don’t stand a chance if you don’t ask, right?)