In February, we received a note from Captain Lauren Guibert, trainer and athlete at CrossFit Ramstein in Germany.  Lauren wrote to tell us about Ramstein’s successful implementation of our Whole30 program, which developed into a 45 day affiliate-wide nutritional challenge called the “RAM45”.  Lauren wrote, “At the end of last year, fellow trainer and bad-ass Crossfit chick Vanessa and I threw around the idea of doing a nutritional Challenge using your Whole30 framework. After doing some research, typing up the parameters and figuring out our goals, the RAM45 was born. We started on January 4th and are about 2/3 of the way through the challenge right now. People seem to be really happy with how things are going – we did a Crossfit Total last week and a bunch of folks had multiple PR’s. We have also heard reports of weight loss, higher energy and overall well being.”

Dallas and I were pretty bowled over to receive her note – we didn’t realize the Whole9 had readership in Germany, never mind that an entire overseas affiliate was on board with our Whole30 program!  We asked Lauren if she’d do an article for the blog, highlighting the success of her members and outlining some tips and tricks for other affiliates looking to implement a Whole30 program in their gym.  She came back to us with her write-up a few weeks later, after traveling a bit for work.  Lauren also happened to mention that she had been busy ramping up her training for the South Europe CrossFit Games Sectionals. Lauren wrote, “I ended up winning first overall for women, and I’m heading to Regionals in Sweden this May! I was getting some looks between WODs when I was chowing down on sweet potatoes and Paleo pancakes while the vast majority of the other competitors were pouring different powders and liquids into containers and shaking them up. It was pretty gratifying to stand on that podium knowing that my hard work and diet had gotten me there. Real food works, people!”

Dallas and I would like to congratulate Lauren on her first place win, and throw a shout-out to CrossFit Ramstein, their trainers and members for their hard work, dedication and amazing results following their own RAM45 challenge. Keep up the strong work, Lauren, Vanessa and crew, and keep us posted as to how things are going! (And we’ll keep working on a way to add Europe to the Whole9 Nutrition Workshop Tour.)

It all started at a Crossfit Ramstein trainer meeting in December 2009. Vanessa and I were avid Urban Gets Diesel readers, and had been throwing around the idea of a Crossfit Ramstein nutrition challenge, based on the framework set forth by the Whole30. We were met with great support from our fellow trainers, and decided to start the challenge at the beginning of January to entice all the New Year’s Resolution folks. Somehow between Christmas and New Year’s, one of the other trainers decided to ‘up the ante’ from 30 to 45 days, and The RAM 45 was born.

Vanessa and I both agreed that everyone should be able to evaluate their own short term goals, whether that might be better eating habits, faster WOD times, weight loss, appearance or some combination those things. As the facilitators of the challenge, however, OUR long term goal was for people to make this a long term, sustainable lifestyle, and continue eating like this after the challenge was over. As such, Vanessa and I did a lot of legwork ahead of time to ensure everyone had as much support as possible before embarking on this journey. We posted a very detailed description of the challenge on our website and created a folder on our Forum so participants could post questions, food logs, resources, recipes, and general discussion topics. We required participants to maintain a food log and either post it on the forum or send it to Vanessa and me for review every week. We also assigned ‘Paleo Buddies’ to everyone participating in the challenge, matching more nutritionally advanced people with folks trying it for the first time.

At the onset, 16 of our local Crossfitters accepted the 45-day challenge. Then two former Crossfit Ramstein members (one in Texas, the other all the way in South Korea) heard about it and wanted to join in on the fun. We would soon discover that this was only the beginning of widespread nutritional frenzy! It turns out people who don’t even CrossFit heard about our challenge and started jumping on board. I had friends from afar sending me their food logs, asking me to be their “challenge coach”. Vanessa met someone at the commissary buying the last jar of coconut oil in preparation for the challenge after she’d heard about it through a friend of a friend. And Ramstein member Jon said, “Three people in my office have also started their own nutritional challenges because they wanted a cup of what I was having.” It felt like an alternate nutritional universe – you literally could not go anywhere on the base without hearing someone talking about the challenge. With one localized effort led by two Crossfit Ramstein trainers, a community-wide health and lifestyle revolution had begun.

After surviving several birthdays, the Super Bowl, and Valentine’s Day, our RAM45 Challenge officially ended on February 17th with some astounding results. Everyone PR’d on something during or immediately after the challenge. (And I’m not talking tiny PR’s, I mean 10 or 15lb PR’s on lifts and even a 3 minute PR on ‘Annie’.) Three of our guys lost more than 15lbs, and many of our already lean folks got even leaner. But the truly amazing thing was the feedback we received from members after the Challenge was over. Kari, a former Crossfit Ramstein trainer and current head trainer at Wolfpack Crossfit said, “For me it was a life changing pursuit. I always thought that if I ate whole grains, non-fat dairy and high flax/omega 3 expensive cereals it would make me better in the gym. But all it actually took was the simple pursuit of clean, natural food.” Jon, a Crossfit Ramstein member preparing for the Special Operations Selection Course, said, “I set forth with the goal to just make it all the way through the Challenge and see what it did to me, how I felt and how I performed. Forty five days and 30lbs later, I can honestly say that I am in the best shape I have ever been in. More than that, I have continued the lifestyle (with the addition of a certain Irish Whiskey to my F-Off List) and wake up every morning feeling stronger and healthier than the day before.”

Regarding the initial goal set forth by Vanessa and me – to keep people eating like this after the Challenge was over – all I can say is mission accomplished tenfold. Not only have almost all of the original RAM45 participants continued to eat a mostly Whole30-inspired diet, but every day more people around us are starting their own challenges. Eating good food can change not only your life but the lives of those around you; it certainly did at our affiliate. Who will be the next person, group, or affiliate to change your life in 30 days? 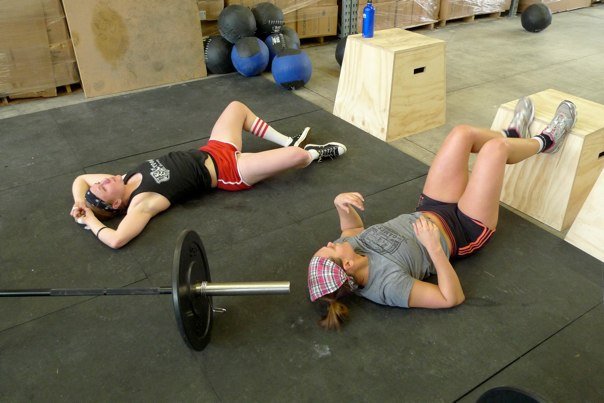 Lauren (L) and Vanessa (R), the architects of the RAM 45 paleo challenge, after doing the "Air Force WOD”