While in San Diego two weeks ago, Dallas and I were lucky enough to visit “Coach B” (Mike Burgener, the famous Olympic lifting coach) at his home in southern California. We headed up in the afternoon to get a tour of his place, work with him on some Olympic lifting and then go eat some giant steaks. 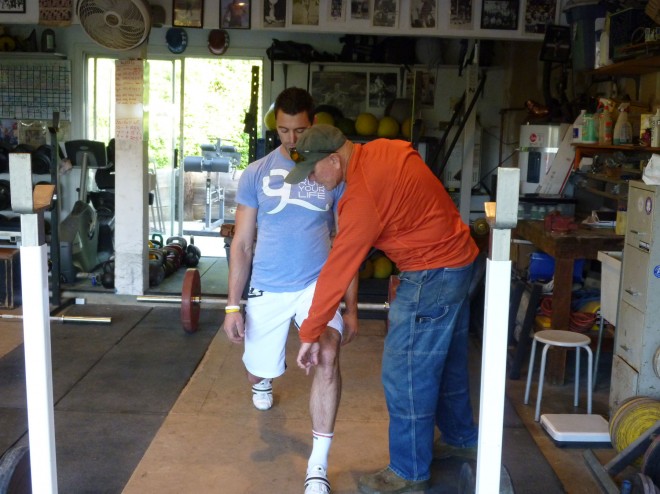 Dallas worked with Coach B on his split jerk, focusing on getting his front leg forward (and splitting more evenly), while I took advantage of the situation by working on my snatch. I’ve only snatched with a coach a handful of times – first with EC Synkowski at CrossFit Boston last April, and then a few times with Dallas. But after the infamous Snatch Incident of 2009, I sort of shied away from the movement. (Explosively hitting yourself in the face with a barbell makes you a little bit scared to explosively pull said barbell off the floor again.) Dallas reminded me, however, that I simply could not pass up the opportunity to work on the movement with Coach B, so I grabbed some PVC and started with the Burgener Warm-Up.

It took Coach B. about four seconds to see ALL of the things Dallas has been trying to coach me towards over the past few months – fully opening my hips during the pull, keeping the bar close and getting more aggressively underneath it. Literally, he watched ONE hang snatch with PVC and immediately knew what my (admittedly common) faults were.

We started by working on the jump – both from up on the toes, and then finally from the floor. He had me do nothing but tall snatches – pulling from zero hang, and dropping under the bar as fast as possible. That layback position he was coaching me to hit was totally foreign – I fell backward more than once – a testament to the fact that my hips have probably never fully opened on a snatch, ever. But with some tactile cues (with Coach standing behind me, and my shoulders hitting his hand during each jump), eventually, I started to get the hang of it. When my pulls were starting to look better, he then had me start to drill “jump, jump, tall snatch”.

At that point, however, Coach B. realized what Dallas has been up against for the last four years. During the first tall snatch, Coach said, “Go”, and I did… after a 5.2 second pause. Which made him shake his head. I did NOT like Coach B. shaking his head at me. It’s not that I was trying to be difficult, and Coach recognized that. “You think too much,” is all he said… and he was right. In every movement, during every strength workout, I unconsciously allow myself a full-blown mental review of every aspect of the movement, in detail, between every rep. Which is why a clean and jerk set of three can take me in the neighborhood of 17 minutes to complete.

See, I’m good about taking direction. If I’m told to pick a spot with my eyes and stay there, I’ll do it perfectly on the next rep. The trouble starts when the next cue is added – say, for example, making sure I’m “jumping” during my pull. I’ll invariably take THAT cue, add it to the prior cue, and then throw in a cue of my own (like “pockets” or “fast finish”) to boot. Which means I’m now trying to think about three big things, instead of just the one cue my coach has told me to focus on. The further along in my session, the worse this gets, until I’m literally spending a full minute THINKING about a movement, instead of just allowing my body to FEEL it. Lord knows after an hour of practice, my body probably KNOWS what to do… but my brain likes to jump on board, usually over-riding what my body is trying to accomplish all on its own.

Coach B figured this out right away, and started drilling me with the loudest, most commanding, “GO!” I’ve ever had yelled in my ear. In the beginning, it still wasn’t clicking, but as we continued with the tall snatch drills, I began to “GO” faster and faster – and darn if my snatches didn’t get better and better. When we were done, he explained to us some of his coaching strategy and theory, and why it’s so important to keep your brain (and full-blown mental review) OUT of your normal training session. 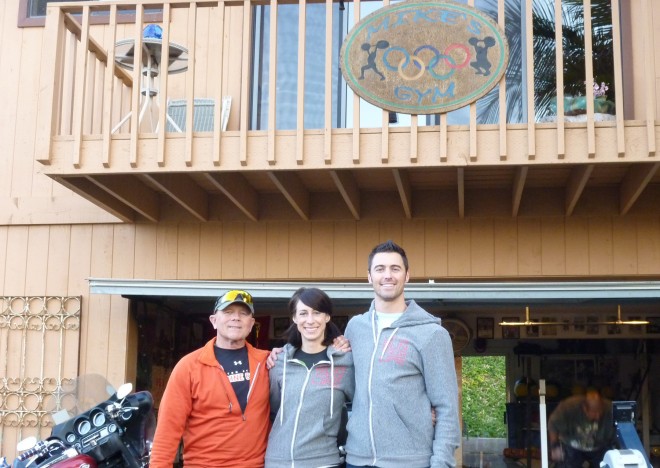 Lessons learned from our visit with Coach B: Well, first and foremost, I’m pretty sure I need to jump. But from a bigger picture perspective, I left Mike’s Gym with a clearer vision of (and stronger commitment to) what my coaches have been asking of me. Don’t over-think your cues, or, even worse, ADD to the cues your coach is giving you – especially if the movement is new. Trust your coach to tell you what to focus on, and then simply follow directions to the best of your abilities. And remember, with this (as with everything else), practice makes perfect. In between training sessions, I’m going to continue to watch movies, review my own videos and read articles to mentally improve my focus and understanding of the movements. But in the gym, when being coached by someone smarter and more accomplished than me, my only job is to LISTEN… and to GO!