by Melissa “anyone seen my third pull lying around?” Urban

I have, it appears, completely forgotten how to clean.

The clean – power, especially – used to be my favorite Olympic lift. My squat clean PR is 115#. My power clean PR is… 115#. Weird, I know, but I’ve always had a good pull and a comparatively weak front squat, and dropping underneath a heavy barbell seems so much harder than simply standing up and catching it.

Those pulls were back in July, however. Between then and now, I got Derailed, and took months off from training and conditioning. And found when I went back to the clean, my body had forgotten how to perform the movement. All of a sudden, I was bending my arms early, driven by the fact that I wasn’t opening my hips all the way before I started to pull. My elbows were still fast, but my footwork had degraded – I was now landing wide, with a weird extra turnout on my left foot. All of those issues meant the amount of weight I could catch had dropped considerably, and those I did manage to catch just felt wrong.

Dallas has had me focusing on tall cleans and cleans from the very high hang to try to address my second and third pulls, and lots of footwork to address my landing position. Things had been getting better – I recently pulled some 100# hang cleans, and my drops under the bar were getting fast and aggressive. But it’s hard not to get caught up in the “should be” and “used to”, and it’s hard not to get emotional when you feel like your performance is sucking, and when those factors combine, training sessions can get a little ugly.

We were training tall cleans in the athletic center at Colby College, between Dallas’ volleyball games. I worked up to 95# pretty fast, pulled one, and then dumped three in a row. I couldn’t keep the bar close, wasn’t pulling aggressively enough. And went from Compliant Trainee to Cranky, Belligerent Trainee in zero-point-four seconds.

You have to understand how unusual this behavior is. In the gym, I just do what he tells me, all the time, without question. He’s got more experience than me, and he’s unemotional about my performance, which means his judgment is always more sound than my own. So for me to get cranky like that is practically unheard of. Trouble is, I was FRUSTRATED. That weight should not have been hard. I used to be able to pull 95# all day long. Therefore, ignoring everything that ACTUALLY WAS on that particular day, and focusing solely on what SHOULD BE and USED TO BE… I wasn’t going to leave that platform until things spontaneously got better.

Left to my own devices, I would not have dropped weight to work on technique, taken a break to discuss what was going wrong and how to fix it or rested to give my tired muscles a break. No, Smartypants Urban would have pulled heavy, ugly clean after heavy, ugly clean, getting more and more tired, feeling my form degrade more with each attempt, getting more frustrated and burning improper movement patterns into my already burned out CNS. What I wanted to do – beat myself with the barbell until I “got it” – is a vicious cycle that never ends anywhere good. Sure, there are very rare instances where getting angry actually helps my lift. But most of the time, getting emotional over my performance, getting stuck in the “should be” and “used to” of the past, does nothing but hurt my training and my progress.

I stopped after another three (terrible) reps and took that break, knowing Dallas was right and that I wasn’t doing myself any good. We stripped weight and worked technique for the rest of the session, with me quietly following his directions every step of the way. Later in the afternoon, we talked about why I felt the need to pound rep after rep into my already blitzed CNS. There was really no good reason, other than I was pissed and wanted to hammer the form into submission. Trouble is, with something as technical as Olympic lifting, that pretty much never works. I knew it, and he knew it, and I would have saved myself a half-hour of aggravation if I had only listened.

The next time I find myself struggling through a movement, or stuck in the “should be” or “used to”, I’m going to do my best to recognize what’s happening. I’ll stop, take a break, walk away from the platform, think about what I’m doing, talk about what I need to do. Or, simply chalk it up to a bad “_____” day and move on to something else. Not every day is a good day, not every pull is a PR, and sometimes things get worse before they get better.

I wish I could end this post – and my clean session – on a happy note, but the rest of my pulls were mediocre at best. After my little temper tantrum, however, I took the day for what it was – a really crappy practice session – and stopped trying to make it something bigger by comparing it to the past and passing judgment. See, the “should be” and “used to” doesn’t matter. What IS, what you’re doing right now, is the only thing you have control over, and the only thing you should be focused on. And if what you’re doing right now is hurting more than it’s helping, you should probably check your ego, dump the past and rethink your strategy ASAP. Tough love to myself this time – end lesson. 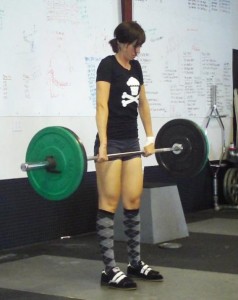