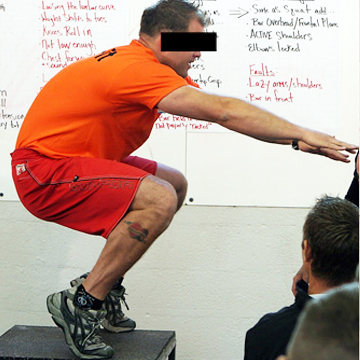 client (klī’ənt)
–noun
1. A person or group that uses professional advice or services
2. A person who is receiving benefits, services, etc;  a customer

While treating physical therapy patients and training fitness clients, I find myself using similar approaches to teach people how to move. In the PT clinic, performing a movement, exercise, or stretch with correct technique can mean the difference between successful rehabilitation and exacerbation of symptoms, between progress and frustration. I see the same potential outcomes when coaching in the gym. Performing exercises properly and paying attention to the subtleties of the movement will determine whether my client sees an increase in physical capacity, or is plagued by injury (now, or in the future) as the result of the reinforcement of incorrect and unsafe motor patterns. As a coach, I’ve generally been known as a stickler for technique – just ask Melissa, who has been held back during many a session to focus on form before moving up in weight.  But given my professional experience, I’d rather err on the side of exceptional technique than prioritize maximal intensity at the expense of quality of movement.

We recently talked about the overuse of “sexy met-cons” in CrossFit gyms, but there’s a related issue when discussing high-intensity workouts.  That issue is the important role that form plays in your athletic development.  The “intensity is king” mantra preached at CrossFit’s Level One certifications is, in my opinion, used as a rationale (or an excuse) to train harder, but not necessarily smarter.  Haven’t yet been to a Level 1?  Here’s an excerpt, based on Melissa’s (and other attendees’) notes:

According to Pat Sherwood (who led the discussion on “intensity” at Melissa’s L1 in January 2009), “Unsafe is unacceptable, but so is perfect form.”  The instructor explained, “If you’re doing high-rep deadlifts and your back starts to round, that’s unsafe and unacceptable.  But if you’re doing that same set of deadlifts with perfect form on every rep, that’s also unacceptable.  You’ve either gone too light (in weight), or you’re not working hard enough.”   Sherwood explained that the ideal is referred to as ‘CrossFit slop’.”  The ‘slop’ ideal is often cited within the CrossFit community as 20% form degradation (compared to 100% perfect form). According to CrossFit theory, that’s the optimal balance of effort and safety.  “That’s where intensity lives,” Sherwood said.  “Technique has to be good enough to increase intensity, but you should never strive for perfect form.”

And here’s where I take issue with this concept of “intensity is king.”  In my experience, the 20% ‘slop’ advocated by CrossFit often devolves into a 50% slop in practical application, especially with longer length, high-rep met-cons. (Lighter movements, like those usually prescribed in a chipper workout, can almost always be completed any which way, even with form that makes your eyes bleed.)  I’ve seen patellar tendonitis from high-volume air squats, strained shoulders from shoddy thruster technique, and tweaked lumbar spines from high rep deadlifts pulled with careless form, all driven by the pursuit of  “intensity”.  Now, I like job security as much as the next guy, but what I’m seeing in my CrossFitting patients is bordering on the ridiculous.

As an example, I consulted with a local CrossFitter on her squat form a few months ago.  Her technique was seriously lacking, due primarily to a lack of skill work and quality practice.  She exhibited a severely rounded back, weight on the balls of her feet – heels off the ground, even! – and poor control of depth and speed.  It was not pretty, nor was it safe.  At the time, I stressed the importance of improving her squat technique and general strength before continuing to push hard on long, high-rep met-cons.

She recently contacted me for physical therapy advice, saying her knees had begun to hurt.  I asked about her last workout, and she replied proudly, “I did 1,000 squats for time”.  One.  Thousand.  Squats… I couldn’t make this stuff up, people. I can’t imagine how her fitness actually improved during that workout – but she did successfully reinforce sub-standard technique with 1,000 (!) repetitions of a critical foundational movement. And yet she was proud of being the girl that keeps her intensity really high, “ripping it up” at the gym… even though she was hurt.  At this time, I’d like to propose a spin-off of Jeff Martone’s famous quote, “If you’re gonna be dumb, you’d better be tough.”  Try this, CrossFitters: “You’re not tough enough to be that dumb.”

At the Whole9, 20% slop isn’t good enough.  As Melissa will tell you, you don’t get to move up in weight – or go faster – unless your form is really, truly solid.  (I use my “A-minus” grade as a subjective criteria – not perfect, but pretty darn good).  In addition, your “max effort” pulls will not count here if they’re hideous.  And don’t give me the  “in the real world, it doesn’t have to look pretty” argument, either.   Sure, I’ve seen 500 pound deadlifts PRs that look like question marks… but those strong dudes didn’t get that way by training with that technique.  That degradation in form is acceptable when it matters, like lifting a fallen tree off a family member, carrying an injured comrade out of harm’s way, or even non-emergency, one-time situations like competing in a lifting meet.  But folks, your everyday CrossFit workout is not that time.  Imperfect form in the desperation of an emergency or during a real-world, functional “test” does not justify that level of form degradation during your training.

When we train, our goal is to build the strength, practice good technique, and reinforce only proper movement patterns.  And despite what your ego may be telling you (go heavier, tough it out, rip it up),  I assure you that our approach will serve you well when it’s time to pull a max effort clean, some fast met-con deadlifts or give Grace a go.  Your technique will be solid, your times will improve and you’ll walk away from the gym stronger and fitter, instead of broken and hurting.  Still choose to operate with that 20% margin of “CrossFit slop”?  You can certainly work harder, produce more power, and maybe even be fitter than me with that approach. But you’re sure as hell going to be injured more often too. I have yet to hear a patient tell me, “Well, my shoulder has been hurting pretty bad for the last 3 weeks, but I sure am glad I cut 7 seconds off my Fran time.”  How hard can you train when you’re All Banged Up?  I’ll answer that for you, from personal experience – not hard enough to maintain the well-rounded fitness we seek.

Personally, I’d rather continue working with (smart, hard working) training clients instead of  (all banged up, but my ego’s still intact) patients. But ultimately, client or patient… it’s your choice.  Here’s my card, one way or the other.