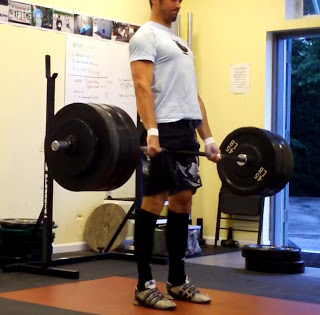 If you’ve been following our business (formerly CrossFit Whole9) for a while, you’ll know Dallas builds all of our custom programming around strength and quality of movement. Because of this strength focus, we’ve yet to program a high rep, high volume chipper like the Filthy Fifty. Our met-cons usually come in the form of a short, heavy, simple drill done after a strength or power workout, or a track or “strongman” day where we sprint, jump, throw stuff and carry stuff. We’re in the business of strength-based fitness, and our programming reflects that focus.

A few months ago, Dallas took that strength focus to the next level and created a Power to the People style program. The 603 PTP was a high volume, low intensity series of workouts designed to do one thing – make you stronger. We chose to work the deadlift and press at the same time, hitting both of those movements four days a week, for eight weeks straight. We threw in some gymnastics and Olympic lifting skill work, short, heavy met-cons and a few track days, but for a two solid months, we did a whole lot of deadlifts and presses.

And almost all of our virtual trainees disappeared.

Up until then, we’d had a good amount of people following our programming on line. CrossFitters and exercise enthusiasts from all across the country (and across the pond) were posting after workouts like Overhead Math and the Sissy Test. But come week three of the PTP program, all but a few loyalists had abandoned our workouts. When we asked why, people commented, “the workouts got boring,” or “it seemed too easy,” or “I missed my met-cons.” Fair enough, maybe… but also a crying shame. Because the people who DID stick around put up to 25# on their deadlift and 20# on their press in just two months. And on top of that, they PR’d workouts like “Cindy”, put weight on their clean and jerks and got a lot more comfortable under (or over) a heavy barbell. Boring or not, the PTP program worked, and the people who saw it through reaped the benefits.

People often make misguided assumptions about CrossFit workouts based on what grabs their attention on paper. “Tough workouts”, “elite athletic training” and “high intensity” translates as high repetitions, endless rounds, a grab bag of exercises (often seemingly chosen at random), or some combination of the above. And there’s a trend, especially among those new to CrossFit and inexperienced with programming, to ride that met-con train all the way to Cortisol Crazytown.

I’m here to caution you… beware the lure of the Sexy Met-Con.

For some (especially those new to CrossFit), the lure of something like the Filthy Fifty or the “300” workout is undeniable. Hundreds of reps of various bad-ass exercises all in one workout? That MUST be good fitness. New trainees doing their own programming fall quickly into the Sexy Met-Con trap, piling on the reps, adding more and more exotic movements, needing an excessive amount of time to complete the workout. They get beyond creative, making up workouts so complicated that you need a map and a flashlight just to follow along.

Trainees aren’t the only victims of the Sexy Met-Con pull. New coaches and affiliate owners fall into this trap as well. What looks like you put more effort into your programming – seven rounds of five different exercises with a complicated rep scheme, or “Back Squat 5×5”? What’s an easier group class workout – a 20 minute light-weight met-con, or a structured PMenu-style Olympic lifting session? This isn’t a dig on those coaches or affiliate owners – I get it. The pressure to get creative and put out fresh “unknowable” workouts every day is enormous. There is also a need (real or perceived) to drastically distinguish themselves from their Globo-Gym competition. Add in the pressure from clients to make them SWEAT so they feel like they’re getting what they pay for and the Sexy Met-Con becomes an easy go-to on all counts.

But while it’s an easy trap to fall into – some affiliates never bear-crawl out. I follow several gyms’ custom programming, just to keep an eye on what everyone else is doing. With one, I counted back a few months and found 22 days of met-con out of a month’s worth of programming. Twenty. Two… not including rest days. Another programmed “find your deadlift one rep max” workouts two months apart – without a single day of strength-oriented deadlifting in between. Sure, they did some light deadlifts during met-cons… but how much does your 1RM go up without putting the work in on your 5x5s?

There are a few things wrong with this phenomenon. First, longer length met-cons (even those that go “heavy” for time) will not make you as strong as you could be. Sure, your cardio will improve, and you’ll most likely see some strength gains, but nowhere near the gains you’d see picking up heavy stuff with a tried-and-true 5×5, 3×5 and 3×3 protocol. (Of course, this point is only valid if you believe, as we do, that prioritizing strength is the most effective way to get better at everything.)

In addition, these types of workouts miss the bus by focusing on quantity at the expense of quality of movement. The never-ending pursuit of improved met-con “performance” overlooks the important component of quality-based training. You can learn your nine foundational movements in a group class and “practice” them in a chipper, but none of those movements (performed fast and loose, as these met-cons tend to inspire) prepare you for moving a real load. Sloppy air squats won’t translate to more weight on your back, and a hundred med ball cleans won’t prep you for a heavy clean and jerk. What you are doing, unfortunately, is reinforcing bad movement patterns for literally hundreds of repetitions. And that’s hard to recover from if and when you decide you want to start adding weight to the bar.

Want to be a better CrossFitter? Make sure your workouts are constantly varied, right? On first glance, these met-cons seem to fit the bill. The structure makes you THINK you’re working a good “constantly varied” program, with fresh-out-of-the-hopper movements and convoluted rep schemes. But “constantly varied” means more than just swapping out exercises in your 30 minute met-con. These Sexy Met-Cons work primarily one metabolic pathway, with a very limited range of strength and power. So all those randomized exercises and rep schemes, when contained within the same longer length, light-weight met-con, aren’t really variety at all.

But the biggest danger by far is this – these Sexy Met-Cons can quickly take a dive into “overkill” territory, where your training starts to hurt more than it helps. You can’t tell me that day after day of Filthy Fifties won’t produce a sharp decline in movement integrity, and the overuse of certain muscle groups, joints and tendons. (How many days of kipping, ring dips and push-ups can you do before your elbows starts to hurt?) In addition, the body goes into serious cortisol production around the half-hour mark, so these day in, day out, longer length workouts wreak all kinds of havoc on the body. These kind of met-cons (much like long distance “cardio”) are notorious for pushing people into over-trained territory, and where over-training lives, injury is soon to follow. (Not so awesome for you, but serious job security for Dallas.)

But who wants to work a boring 5×5 when there are plenty of sexier workouts to choose from? I’ll tell you who. People who want to be stronger. Nothing builds muscle and strength like the big lifts – squat, press and deadlift – supplemented with gymnastics skills for core strength and low repetition Olympic lifts to develop explosive power. And I’m not taking a bunch of one rep maxes, either! Sets of 3’s and 5’s are your money-makers – where you train the body and build the strength. Missing your met-con? Work them in, but hit them hard and keep them short. Piling 30 minutes of “cardio” after a serious strength workout is, in a word, counterproductive. And for the love of Pavel, keep them simple. Thrusters and burpees, broad jumps and overhead carries, sprints and swings – all simple, all brutally effective.

Our PTP program may not have looked like much on paper, but damn if it didn’t make our trainees strong as hell, and fitter across the board. So beware the false promises of the Sexy Met-Con. Getting fancy with a chipper is fun once in a while, but if you constantly find yourself in need of a map and a flashlight to finish your workouts, sprint (don’t jog) to the nearest barbell and enjoy the simple pleasures and performance gains of a back squat 5×5.