CHICO, CA (AP) – A Maine man found wandering outside a local CrossFit gym was held for questioning after alleged “mischievous conduct” involving a California Highway Patrol vehicle, although the police admit they are still not sure what charges technically apply. 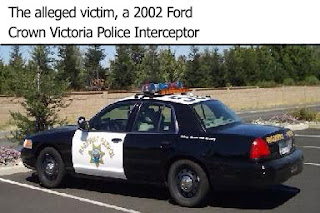 According to a the California Highway Patrol (CHP), on Tuesday, September 6, 2009, Dallas Hartwig (a resident of Brunswick, ME) was taken in for questioning for allegedly disturbing the peace and endangering the welfare of a police cruiser. Mr. Hartwig was accused of repeatedly jumping on the roof of the vehicle, causing a public commotion and damaging state property.

One witness (who wished to remain anonymous) described the event. “There was this guy just, like, stalking this cruiser. It was weird, he kept walking up to it, bouncing up and down and then sprinting around the parking lot.” She described the suspect as a white male, 6’ 4” tall, with dark hair, wearing a light blue t-shirt and black board shorts. “He was just hanging out looking sketchy, and then he suddenly just, like, JUMPED on the car. Just jumped right up on the roof. From the ground. I’ve never seen anything like it.”

Police immediately reclaimed their cruiser and detained Hartwig for questioning. However, further inspection of the vehicle showed no damage whatsoever, weakening the department’s case. A CHP officer who asked not to be named added, “Uh, we’re not really sure what he did was illegal. Truth be told, we don’t know what the heck to charge him with. There’s always ‘criminal mischief’… but that’s just something we made up to use when we can’t think of anything better.” The officer goes on to say, “I’ve seen the video… it was pretty cool, actually. I wonder if I we can swing by my house on the way to the station so he can show my kids. They’d love it.”

Hartwig was released without being charged after several hours of questioning and a lesson in box jumping for members of the CHP Ball-Busters, the department’s co-ed recreational basketball team. Upon his release, Hartwig refused to comment, saying only, “I’m coming for you, Boz.”

Later in the week, a suspect matching Hartwig’s description was recorded jumping on a Sacramento city cruiser, leading the CHP to put out an all-points bulletin for his arrest. A CHP representative stated, “The guy’s got ups, that’s for sure, but he’s got half the force running around the parking lot trying to jump on their cars. It’s like Jackass, only with tasers and guns. Loaded guns. Someone’s gonna get hurt.”