A few weeks ago, I spotted a post on a blog that caught my attention. “CrossFit Girl gets her first pull-up! Watch the video here.” Given my love affair with pull-ups (remember the t-shirt?) I have a special place in my CrossFit heart for women who finally accomplish that goal. To this day, I still consider my first pull-up to be my proudest CrossFit moment ever. So I clicked on the video link, giddy with anticipation… and was immediately disappointed. Because CrossFit Girl’s first “pull-up” was a kipping pull-up. And in my gym, that simply does not count.

I am well aware that the official CrossFit pull-up is the kipping pull-up. I understand the benefit of the movement, and how it is used in our workouts. But a kipping pull-up is NOT a pull-up, just like a push-press is NOT a press. They are two separate and distinct movements, used for different purposes. For clarification, a “pull-up” starts from a dead hang (arms straight), and progresses without any swing or momentum until your chin comes over the bar. I don’t care which grip you use – overhand, underhand or mixed are all legit. But unless the above criteria is met, you have not done a pull-up.

It vexes me to no end when women work their kipping pull-ups before they have a single dead-hang. I think the drive to get a “pull-up” is so strong that women are willing to sacrifice true strength and even risk injury just to stake their claim to pull-up fame. But prioritizing your kipping ahead of a dead hang pull-up is bad business, for a few reasons.

First, kipping pull-ups require strength and stability in the shoulder girdle. The momentum generated by the open and closed positions of the swing is enough to seriously tax the muscles, joints and connective tissue, especially if there is not a basic level of strength in those areas. Putting someone on a pull-up bar and encouraging them to swing and pull before their bodies are physically up for the task is simply irresponsible, and risks injury. Tucker preaches this at every Gymnastics Cert – kipping pull-ups should not be introduced until the trainee demonstrates the controlled strength necessary for the movement. That demonstration comes in the form of a properly executed dead hang pull-up.

Second, the entire point of pull-ups is to build strength. While the kipping pull-up does improve strength to a degree, it is certainly not as valuable to strength gains as working dead hang pull-ups. It is entirely possible that a well coordinated trainee can achieve five or even ten consecutive kipping pull-ups and still not be able to perform a single dead hang. In that instance, the thing you’ve most improved is transferring the momentum from the swing into the movement. You certainly have not become as strong as you would be, had you worked to achieve even half number of dead hang pull-ups.

Finally, as a woman, I am pretty sensitive to some people’s reactions when I talk about the things I can do in the gym. While at a party this summer, I was talking about CrossFit, and mentioned to a new acquaintance that I do pull-ups every day. The guy I’m talking to looks at me with a smirk and says, “Yeah, right.” So when I jumped up on the ceiling beam and started cranking out gorgeous, no-momentum, dead hang to chin-over-beam pull-ups (in my party dress and 3″ stilettos)… he shut up fast. That demonstration TRANSLATED. Now, if I had jumped up there and started swinging away, he probably would have been less than impressed. And arguing that “kipping is the official CrossFit pull-up” would only have come off as defensive. So if I’m going to run around town saying, “I’m a girl doing pull-ups”… I sure as hell better be able to back that up, without leaving ANY room for question as to my form or strength.

But Melissa, you may say, there are benefits to working the kip! Are you saying to give it up altogether? Not at all. If I have a woman who is darn close to chin over bar, I may have her add some kipping work to help get her over the hump. And the swing portion of a kipping pull-up is a great shoulder opener, and can help you improve your stability, grip and timing when it comes time to start working the movement. So if a trainee has the basic strength to hang from the bar for a full minute, I may have her start working on just the swing. The point I am making is this – play it smart, play it safe, and play it strong. Keep working on your pull-ups, but make any kipping related work secondary to your dead hang efforts.

I do want to congratulate CrossFit Girl on her first kipping pull-up. It’s a tough movement, and she should be proud of herself. But for the CrossFitters training with us at the 603, I want you to be strong – and strong by ANY standard. So before you get up on that bar and start swinging away, you’d better show me a really pretty dead hang. You’re gonna have to earn that “Got Pull-Up” t-shirt. 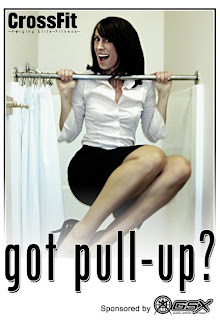