The emails and comments I’ve received in response to my CrossFit Journal article have brought up a lot of good thoughts, and questions. They have made me realize that there is so much more to discuss. Over the next week or two, I’m going to touch on a few of the things you’ve brought up, regarding CrossFit, diet and food.

The first idea for discussion came from an email I received from Jeanette, in New Brunswick, Canada. She wrote, in part:

“I have a very low tolerance for Competitive Dieters: How many blocks are you eating? What are you eating? I don’t eat that. Cheat meal this… sugar hangover that… extra fat here… less carbs there… JUST SHUT UP and LET ME EAT MY GODDAMN COOKIE!”

CrossFit is competitive, in lots of ways. We compare times, weights, workout results, body fat percentages. And yes, we are competitive in our eating as well. Not the kind of competitive eating that Gant Grimes used to do – was it hot dogs, or maybe chicken wings? And not necessarily the kind that Jeanette is referring to. Though she has a point about outside dietary pressures, I’ll argue that the majority of our competitive eating is far more subtle. We weigh, measure, track and report our diets in a very public manner, on message boards and in blog posts, thereby opening ourselves up to perceived criticisms. We read about OTHER people’s diets, and imagine a perceived pressure to also eat squeaky clean, to cut out grains – no, grains AND sugar – no, grains, sugar AND dairy. Note the word “perceived”… because I’ve never seen anyone outwardly, explicitly judge what I eat. No one has ever said to me, “You shouldn’t eat that french toast”, or “You eat too much protein”, or “Do you really want that martini?” No, the sad truth of the matter is that no one is putting this pressure of “competitive eating” on me… but ME.

Most of the time, if someone DID say to me, “You sure you want that martini?” I would simply pop a blue cheese stuffed olive in my mouth and direct them to my Healthy/Fuck Off Scale. I am usually confident enough in my diet, my athletic performance and the level of balance I have achieved in my life to brush off any kind of dietary peer pressure. But there are certain times – usually when I’m feeling a little insecure about my CrossFit-ness – that I do fall into the competitive eating trap.

This was never more evident than when I attended the first Science of Exercise Certification back in January. See, I’ve been to plenty of certs. And when you’re working out eight hours a day on Saturday AND Sunday, people tend to relax their diets a bit. It’s all about getting food in when you can, and if that means a wrap, a bagel or a cheeseburger, so be it. But at the Science Exercise Cert, we weren’t training. It was lecture, for two days straight. So people needed to eat, but there wasn’t that added factor of needing to hoover whatever food you could fit in between workouts. And the caliber of people in that room left me feeling… well, kind of like nobody. I’m sitting next to Jeff Martone and Coach Rip, behind Matt Lalonde and Tucker, in front of Eva T and Coach Glassman. I’m in a room full of fire-breathers, affiliate owners, coaches and subject matter experts. Aaannd… me. So yes, I was feeling a little CrossFit insecure.

During the day, it was straight-up Paleo Gone Wild. The room was full of jerky, almonds, organic smoked turkey breast and fresh fruit. We’d go out for lunch and the chips and salsa they set on the table might as well have been a plate full of rattlesnakes, the way I thought I saw people recoiling. Every order was special – no bread, hold the cheese, can I get extra broccoli and no salad dressing? It was INSANE… or maybe that was just my perception of the situation. Because certainly no one was flaunting their Paleo or Zone. No one questioned what I was eating, no one probably even noticed. And there were plenty of people drinking beer and eating cornbread, having a good old time at dinner on Saturday night (which is the only time I relaxed on MY diet). But because I was kind of nervous anyway, and wanted to do my best to fit in with all these awesome CrossFit people, I became a super-Nazi about my food choices. Way more than I would have been, had it been a normal weekend. (I did NOT get my french toast that Sunday, which is a travesty.)

How often do we let competitive eating peer pressure get to us? And why do we do it? If our diets are clean, and we are happy with our performance, and our lives feel balanced, then why would we ever torture ourselves with trying to “keep up” with the next guy’s diet? It makes no sense, and yet I suspect we all fall into that trap once in a while. So here’s what I do to get myself back in check.

CrossFit isn’t for sissies. As the Black Box says, sometimes it’s a Hostile Workout Environment. But that doesn’t mean you need to bully yourself into health and fitness. Choose your course, find your balance, and be confident in your decisions. Don’t allow competitive eating to become a part of your daily routine. And Jeanette – go ahead and eat that cookie, girl.

Gant’s recovery meal from this weekend. In his own words, “8 oz. of steak, 8 oz. of chicken, and 8 oz. of sausage. That’s 24 Zone blocks of protein. Not anywhere near a PR- just a good meal. Not pictured: olive oil and Texas ale.“ 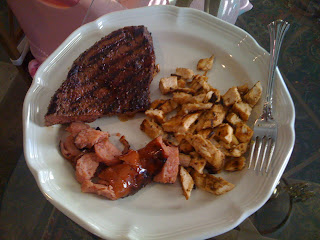