NOTE: This post is now front page news on Robb Wolf’s web site. I have died and gone to Science-y heaven.

The fourth member of our group this weekend was Mathieu Lalonde, from Cambridge, MA. In Matt’s own words, “I have no background in nutrition and exercise. I’m a chemist with a lifelong interest in nutrition and human performance. My background allows me to understand the nutrition and exercise literature that I delve into as a hobby. I obtained my bachelor’s degree in science with a concentration in chemistry from the University of Ottawa (Canada). I then obtained my PhD in organic chemistry at Harvard University. I am currently pursuing post-doctoral studies in inorganic chemistry at Harvard.” (Translation: Matt is scary Smart.)

Matt has also obtained several CrossFit certifications, including Level 1 Instructor, Basic Barbell, Level 1 Gymnastics, Nutrition, and Running. He also hopes to pass the test and obtain his Science of Exercise certificate. (I told him to let me know if he runs across any really big words he doesn’t understand.)

Matt has a real gift for explaining extremely complicated, highly technical concepts in a manner that is not only easy to grasp, but directly relatable our training, nutrition and fitness. Some of the most exciting things I learned this weekend came from our off-line discussions. I’ve even quoted some of it back to friends and family already. (Like why adding cinnamon to your coffee gives you an extra buzz.)

Upon our return from Texas, Lu and I continued to talk with Matt about nutrition and diet. We both eat Paleo, and have dabbled with Zone. From our conversations came the below exchange – a clear and concise breakdown of several semi-confusing Zone and Paleo points. I’m betting our questions are your questions, so if you’re trying to clean up your diet, just starting to eat Zone and/or Paleo or looking for the best way to optimize performance, Matt’s advice is a must read.
_____

Lu: In preparation for the Games Qualifiers (May 16th), I bought the Paleo for Athletes book. I can already tell a difference with how I’m feeling, but any additional advice you can give me with my diet would be great.

Matt: All you need to do is follow the CrossFit prescription of meats, vegetables, nuts and seeds, some fruit, little starch and no sugar, no grains, no legumes (including soy and peanuts) and no dairy. The hard part is finding the right ratio of protein, fat, and carbohydrate. I personally work best on 20% carbohydrate, 35% protein, and 45% fat. The ratios that are recommended by the Zone (40% carbohydrate, 30% protein, 30% fat) are a good place to start, but typically too high in carbohydrates. You will have to experiment in order to find what works best for you. Keep in mind that the leaner you get, the more fat you should consume.

Me: And that is one of the trickiest things about Zone – the fat blocks. Do you double, triple? How do you figure out how much you should be eating?

Matt: The best strategy to find your optimal fat intake is to use one of Robb Wolf’s approaches: Cut out one carb block and replace it with three fat blocks. Gradually continue to cut out carb blocks and add fat blocks until you find your ideal Zone.

Matt: Yes, that is correct.

Me: And she could keep subbing out carbs for fats in the same manner, until… what? You say “until you find your ideal Zone”, but what should you be looking for to determine when you are at the right level?

Matt: You want to look out for hunger, energy levels, performance, and recovery. If your sister is always hungry on the Zone, or if she feels a little sleepy after a meal, she is likely eating too many carbs. She should gravitate slowly toward more fat until the problems are resolved. Conversely, if you do not perform as well as you usually do in your next few workouts, you may be eating too few carbs. (Your glycogen stores are not being replenished fast enough.) So energy levels are a big indicator of whether or not you have reached the ideal Zone. Remember, CrossFit’s “Zone” was developed not just for weight loss but for peak athletic performance as well. Regardless, you probably don’t want to go much lower than 20% carbohydrate.

And you will know immediately if you are eating too much fat. Some of the fat will escape the GI tract and end up wreaking havoc on your digestive system. Enough said.

Me: Another question… I eat fat on its own (like avocado and EVOO), but I also get fat from some protein sources (like bacon). How do I figure out how much I’m really eating?

Matt: For the most part, unless you are already overweight, don’t worry about the fat content of the meat. Just use common sense. If you eat really fatty meat like bacon or sausage, just eat a little less fat in the form of nuts, seeds, olive oil or avocado. I also disagree with Dr. Loren Cordain (author of “Paleo for Athletes”) on a few points. He recommends that we eat walnuts and macadamia nuts and that we consume oils such as flaxseed oil and canola oil because they contain more omega 3 fatty acids. There is a huge problem here! These plant sources of omega 3 fatty acids contain alpha-linolenic acid (ALA) almost exclusively. The omega 3 fatty acids that you really need are EPA and DHA. The body can transform ALA into EPA and DHA, but the process is really inefficient. And during that process, the excess ALA spills over into pathways that synthesize bad hormones. Clinical studies have shown that too much flax seed supplementation causes cancer (amongst other problems).

Me: So what are better fatty acid foods?

Matt: Eat walnuts, macadamia nuts, and flax seeds if you want to, just don’t overdo it. I recommend getting your omega 3 fatty acids from game meat, fish and fish oil, as well as grass fed beef. Robb recommends anywhere between 1 to 15 grams of omega 3 supplementation (fish oil) per day.

Also, don’t use walnut oil or flax seed oil for cooking. Just use olive oil and coconut oil, as well as animal fats. I have no problems with butter, although some of the Paleo purists might disagree. Canola oil is thought to be fine for cooking, but I personally avoid it for the reasons I previously mentioned.

Lu: So how much you eat matters, and obviously WHAT you eat matters… what about WHEN you eat? Specifically, how do I figure out this whole post workout (PWO) thing?

Matt: Robb Wolf often recommends consuming half of your day’s carb blocks in the form of high glycemic carbs (such as sweet potatoes) immediately a
fter a workout. This is effective for quick recovery, and to put on muscle mass. Here is why this works:

When you train, your body turns on a process called ‘non-insulin mediated glucose transport or intake’. That means your cells can now absorb glucose from the bloodstream without the help of the hormone insulin. This makes sense – when you need energy (glucose) and you need it fast, you eliminate the middleman (insulin). This rapid response diminishes gradually once you stop exercising, and is completely shut off after about an hour. That means that if you consume some good quality food that is readily absorbed immediately after your workout (ideally within 30 minutes), your cells will quickly replenish their glycogen stores. The best food to eat after a workout is protein (for muscle repair) and high glycemic carbohydrates (to replenish glycogen stores). You want to avoid foods that contain fat and fiber because they slow down digestion, and the ensuing absorption of nutrients. As an example, Robb often recommends salmon and sweet potatoes as the ideal PWO meal.

Me: I actually train in a fasted state, and don’t eat for a few hours after exercising. I’ve found if I try to cram food down post workout, it kind of messes up my energy and eating for the rest of the day. What’s going on there?

Matt: There is a caveat to all of this. Depending on your metabolism, you might not want to eat immediately after a workout. For example, I spent my childhood eating Rice Krispies for breakfast – drenched in milk and covered in added sugar. I completely screwed up my insulin sensitivity in the process – I became somewhat insulin resistant -which is evident by how easily I put on weight at the waist. (When you see people who are fat and round, they likely suffer from insulin resistance. The hormone causes fat accumulation at the waist.) Given that insulin is involved in various energy storage pathways and a plethora of other physiological responses, it is in your best interest to have the highest insulin sensitivity possible. As a result, I now do as much as I can to improve my insulin sensitivity.

The hormonal changes that occur during and after a workout greatly improve insulin sensitivity. However, if you eat high density carbohydrates within 30 minutes of a workout, you ruin the insulin sensitivity that you’ve gained. You recover quickly, but your insulin sensitivity probably doesn’t improve – which should be your big picture goal. In this instance, here is what I would recommend… If you are at a competition or event where you are performing multiple workouts, eat protein and carbohydrate (no fat, no fiber) immediately after your workout. Under normal circumstances where you will not be working out for another 12 to 24 hours, don’t eat until at least one hour after your workout.
_____

Lu and I have a theory that scientists are the new rock stars… and with Matt’s talent, he should be playing to a sold out house. While this only covers a tiny portion of diet and nutrition for athletes, I’m hoping we can get Matt to take a few minutes away from his busy day of purifying chemicals using flash column chromatography and taking nuclear magnetic resonance spectrums of compounds (seriously) to guest post here again. 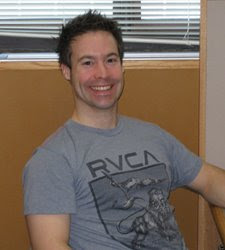 Mathieu Lalonde, thinking Smart things at Harvard. Note, I do have an alternate SUPER HOT picture of him, but for fear of causing a girly riot that would make the hallways of Harvard look like a Jonas Brothers Concert, I don’t dare post it here. You can find Matt on Facebook under “Mathieu Lalonde”.