Apologies in advance, but this post brings The Return of the F-Bombs. From the author’s perspective, they are deliberate, and essential.

Since I was only in Virginia for a few days, I wanted to make the most of my time here. That meant sucking it up and deliberately (but carefully) overtraining while I was in town.

The gymnastics cert, on its own, was a serious workout. Two full days of pull-ups, ring work, handstands and L-sits did a number on my core, and more significantly, my shoulders. All my overhead work qualifies as “goat”, so being upside-down for five hours on Sunday left my shoulders, back and traps completely trashed. And while my core is pretty strong, it is no match for hours of skin the cats, ring inversions and L-sits. Now think about adding 20 minutes of kettlebell snatches, clean and presses and high pulls on Monday night and you can imagine how my shoulders felt. So when I read the CrossFit Fairfax workout for Tuesday morning, I had to laugh. I’m pretty sure Satan himself checked out my blog and thought, I really need to chime in here.

It might as well have been called, “You’re Fucked, Byers”.

Previewing the workout the night before was a mistake – I was up all night thinking about how I would get through the next morning. However, the chance to be coached by Maggie Dabe-Colby was impossible to pass up, no matter how tired I was. Plus, it was a great opportunity to get some feedback on two Goat exercises. So I rallied early Tuesday morning and headed over to the box.

Meeting Maggie was a really big deal. She has been a long-distance inspiration – I even wrote about her “3, 2, 1, GO” cue in my CFJ article in January. So I was really excited to see how far she could push me – and how hard I could push myself under her watchful eye. I decided to hit the OHS light – 45# – given how my shoulders were feeling. But I wanted to kip as many pull-ups as possible, even if it meant I got less rounds. We managed the introductions, hit a quick warm-up, talked a little bit about my form, and got straight to work.

The first four rounds went well, although the OHS were shaky and my pull-ups failed fast in rounds three and four. I would do one, and have to come down and rest. The second my foot hit that box, Maggie was right there in my ear, saying, “Two, one, go”. And I WENT, every single time, without hesitation… although in my head I was thinking, “Damn, girl, don’t I at least get a three?” My lats and grip were so fried that Maggie told me to switch to jumping pull-ups in round five, so I could spend more time under the barbell. (As a rule, they don’t use bands at their gym.)

At that point, the scaled pull-ups went fast. The overhead squats, however, were a totally different story. The actual weight of the bar no longer mattered, because it was the heaviest thing I have ever put overhead. Maggie stayed right there with me, giving me GREAT cues. Big shrug. Big breath. Lock it in. PULL yourself down – don’t drop too fast. She spent a lot of time with me, and I hung on every word she said. But my body refused to cooperate. My shoulders were failing, my coordination was shot and by round six, I was dumping just as many squats as I was making. And every time I got into the hole and lost it, I had to stand up, clean the barbell, get it up overhead and start all over again. As hard as I was trying and as great as Maggie’s cues were, my muscles were simply no longer responding to the commands my brain was giving them.

It was frustrating. So, so frustrating. I swore a lot. I took a deep breath and refocused after every miss. I clenched my teeth and gripped the bar and tried to simply DO what Maggie was telling me to do. But the squats were relentless, and they quickly inflicted some irreversible mental and physical damage. I’ve heard others talk about getting emotional during a workout – crying, even, out of pain or frustration or exhaustion. But I have never experienced that myself, until yesterday. Every failed rep saw me more pissed off, more discouraged, more physically and mentally defeated. It was impossible not to let it get into my head. “You’ve missed two in a row. You’re wearing yourself out just picking the damn bar off the ground. How are you going to get through four more?”

I’d make a squat, then dump one. I did twice as much work as I needed to, and I became more and more unglued as each minute passed. But I never stopped. I did not take a break, I did not give up. I just kept standing up and starting over, because that’s what I was there to do. And one by one, I knocked those squats out. Each successful rep was a victory, each failure drove me to choose – break down now, or pick up the fucking bar. By the end, I was moving on auto-pilot; not thinking, just doing. Clean. Press. Snatch grip. Press. Maggie. Slow down. STAND UP.

I finished with eight rounds, plus three overhead squats. I did not stop moving until the whistle blew. And then I kind of lost it for a minute. I felt crushed. I felt beaten. I felt relief. I felt proud of myself. At that moment, all I could do was put my hands on my knees, bend over, and fight to catch my breath as I tried my hardest not to cry. I did not entirely succeed. I have never experienced that feeling before – not from a workout, at least. It was, for lack of a better word, intense.

I was still a little overwhelmed when I thanked Jeff and Maggie for having me. I told Maggie how much of an inspiration she was, and how much I appreciated her getting me through that workout. And then I left, needing time to mentally and physically regroup. An hour later, I was already feeling myself again. I was tired, sure, but I was able to reflect back on the workout and see it for what it was. Those 20 minutes brought the very best effort I had to give – regardless of the result, regardless of the weight moved, regardless of the rounds earned. In this one, special instance, I don’t care what was measured – I care about what I FELT. And that feeling is what I will take with me as I continue my training. The next time I think I’m at the end of my stamina, my strength, my endurance, I will remember what it felt like to give more than I thought I had to give. And I will push through again.

Thank you to Chris, Maggie, Jeff and Tony for the coaching and encouragement. 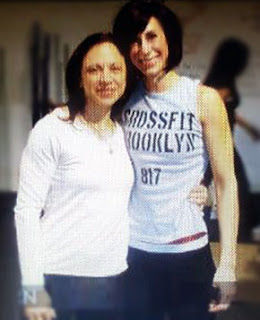